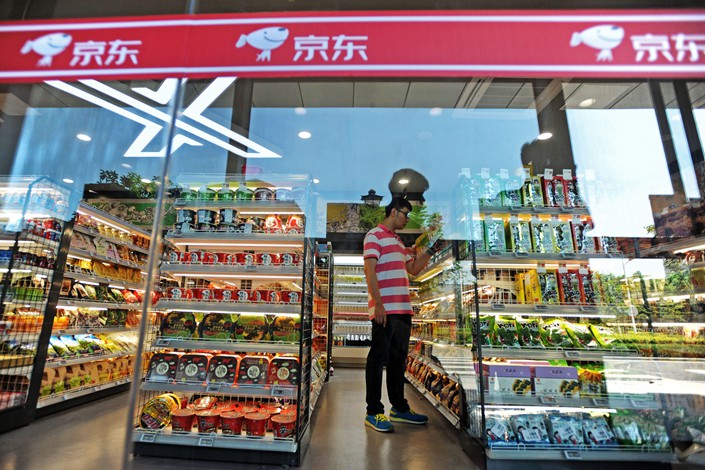 A customer shops at an unmanned convenience store of online retailer JD.com in Wuhan, Hubei province, on June 15. Photo: IC

(Beijing) — JD.com Inc. has opened an unmanned convenience store in the Indonesian capital, its first such location overseas, as it works to tap into Southeast Asia’s booming e-commerce sector.

Unmanned stores leverage technologies such as radio-frequency identification, facial recognition and image recognition to track shoppers’ activity. Such stores offer a different experience for consumers — after picking out what they want, they can simply walk out of the stores without having to wait in line or pay in person, as their credit card is automatically charged.

The 270-square-meter (2,906-square-foot) retail space in northern Jakarta’s PIK Avenue Mall is JD.com’s largest unmanned store yet. JD.com debuted its first unmanned convenience store in its Beijing headquarters in October, followed by a grocery store in the coastal city of Yantai. The company now operates over 20 such stores across China.

The X-Mart sells products such as clothes, consumer goods and beauty products. JD.com said customers “can try on a pair of jeans in the fitting room and walk out of the store wearing them without having to visit a single checkout counter.”

The online retailer, which in June received a $550 million investment from Google LLC, has joined larger rival Alibaba Group Holding Ltd. in expanding into Southeast Asia, where online shopping has begun to take off. According to a joint report issued by Google and Singaporean state investment vehicle Temasek Holdings Pte. in December, the region’s internet economy is projected to soar to $200 billion by 2025, from $50 billion in 2017.

JD.com has struck several deals in the region, including one with top Thai retailer Central Group in September to form a $500 million e-commerce venture. In January, JD.com invested an undisclosed sum in Vietnamese e-commerce firm Tiki.vn, backed by local entertainment and social media firm VNG Corp. as well as investors such as Seedcom, Sumitomo Corp. and CyberAgent Ventures.

JD.com said the new cashier-less Jakarta store marks “a new milestone” for the company’s growth in Indonesia, after it launched an online shopping platform in the archipelago nation in March 2016.

The local site sells more than 350,000 items and serves 20 million consumers nationwide. It is supported by nine warehouses across seven islands and covers 483 cities and 6,500 counties, according to the JD.com statement.