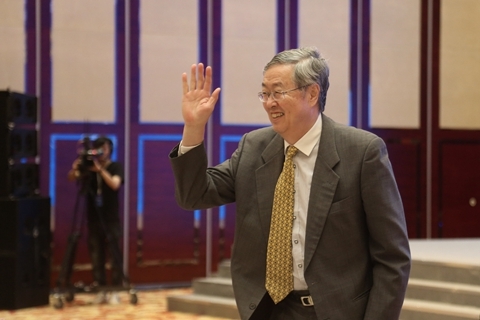 The post will be the second public title Zhou has taken since his retirement after 15 years as governor of the central bank. In April, Zhou was named vice chairman of the Boao Forum for Asia. The forum is known as “Asia’s Davos,” a reference to the annual World Economic Forum held in Davos, Switzerland.

Zhou’s appointment to the CIC advisory council was disclosed at its annual meeting in Beijing Monday, a source close to CIC told Caixin. Zhou, 70, will replace 80-year-old Zeng Peiyan, a former vice premier of China, as an Asia member of the council.

Zhou was the longest serving governor of China’s central bank. He advocated a more market-based economy and efforts to reform the country’s financial system. During his tenure, Zhou led reforms to unpeg the Chinese yuan from the U.S. dollar to allow more market-oriented fluctuation of the exchange rate, to ease government control of bank interest rates and to gradually liberalize the country’s financial market to the outside world.

The appointment of Zhou to the CIC advisory council came at a time when Chinese outbound investments are facing growing scrutiny from foreign governments, especially the U.S.

Tu Guangshao, vice chairman and president of CIC, said at a forum in July that the fund “wants to be a long-term financial investor, so (the U.S.) does not have to feel that CIC’s investment is a threat.”

Headquartered in Beijing, CIC was founded in 2007 as a vehicle to diversify China's foreign exchange holdings and seek maximum returns with acceptable risk. CIC had $941 billion of total assets by the end of last year, making it one of the largest sovereign wealth funds in the world.

The council also has 10 other members worldwide, including David Denison, former CEO of the Canada Pension Plan Investment Board, and John Thornton, former Goldman Sachs president.

In 2017, CIC invested $120 billion in overseas projects, the third-largest amount among global counterparts, according to a company report released last month.