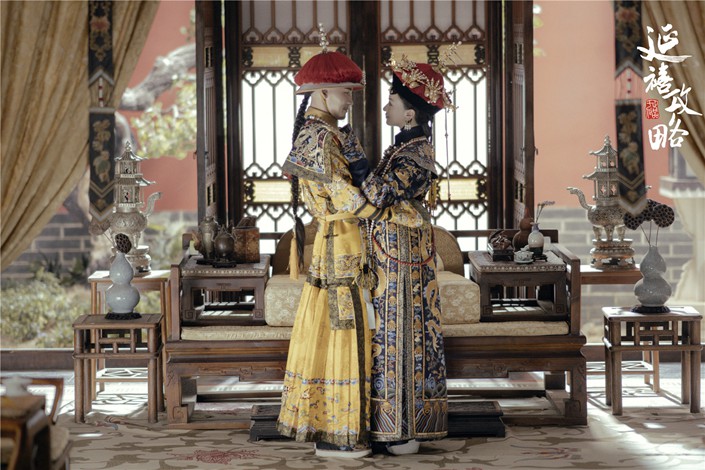 Money-losing iQiyi Inc., which operates a streaming service similar to Netflix, could receive a new lifeline thanks to a hit period drama that has engrossed audiences both at home and abroad.

China’s top online video streamer has licensed “The Story of Yanxi Palace” to more than 70 markets, the company said in a statement on Aug. 13, one day after the saga of intrigue among imperial concubines attracted over half a billion views in one day — a new Chinese record for single-day online viewership.

The 70-episode drama set during the Qing dynasty, which ruled China from 1644 to 1912, was co-produced by iQiyi and studio Huanyu Film and is “one of the most widely distributed China-produced historical costume dramas ever made,” the statement said.

When contacted by Caixin on Thursday, iQiyi declined to comment on the financial terms of its licensing deals or how the show has contributed to its bottom line. But according to local media reports, the right to broadcast a single 45-minute episode costs about $100,000.

The series had racked up a total of 13 billion views as of Sunday, when the finale went live, according to iQiyi. A total of 144 new online series were released on China’s online streaming platforms from the start of the year to July 31, collectively racking up around 100 billion views, according to Beijing Business Today.

As competition in the streaming industry heats up, companies like iQiyi, Tencent Video and Youku have ramped up efforts to develop original productions to vie for the attention of the country’s 800 million internet users.


“Online streamers rely on subscribers to make the bulk of their money,” said observer Yang Siliang in a commentary republished on Caixin (link in Chinese). “But without good quality shows and huge investments, it could mean the end of the road for some.”

Youku Tudou, one of the industry’s other top players, lost big money for nearly all of its life as a publicly traded company before e-commerce giant Alibaba Group Holding Ltd. took it private in 2016. The company posted a loss of 888.6 million yuan ($130.26 million) for 2014, and bled another 435.6 million yuan in the third quarter of the following year, one of its last reporting periods before its privatization.

Acknowledging the importance of original content, iQiyi Chief Financial Officer Wang Xiaodong said in an earnings call on Aug. 1 that the company will up its content production spending to 80% of total revenue in the second half of the year, from around 70% in the first six months.

It projected a revenue jump of as much as 49% year-on-year for the third quarter.

The U.S.-listed iQiyi reported its net loss more than doubled from a year ago to 2.1 billion yuan in the second quarter. But total members surged 75% to 67.1 million, of which 66.2 million were fee-paying subscribers.

IQiyi, in which Chinese search giant Baidu Inc. owns a controlling share, said “Yanxi Palace” had successfully brought in “huge numbers of paying members,” as over 53 million subscribers were glued to its finale within the first 24 hours.