ExxonMobil Wants Its Own Multibillion-Dollar Plant in Guangdong 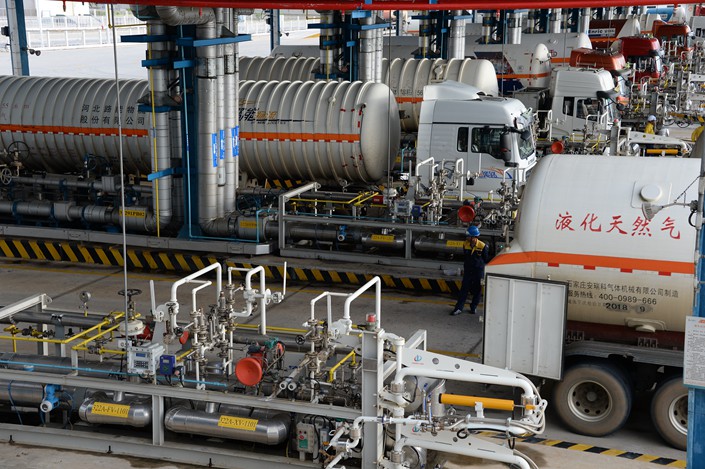 An LNG terminal in the region of Guangxi on July 24. Photo: VCG

ExxonMobil Corp. has revealed it is in advanced talks with Guangdong province for building a multibillion-dollar petrochemical and liquefied natural gas (LNG) plant, just two months after rival BASF SE announced plans for a $10 billion chemical plant in the region.

ExxonMobil has signed a provisional agreement to build the plant at the Huizhou Dawayan Petrochemical Industrial Park in the Pearl River Delta, it announced in a statement on Thursday. The plant will include facilities for developing petrochemicals used in goods manufacturing; and a stream cracker, which produces finer hydrocarbon fuels, capable of producing 1.2 million metric tons of ethylene per year. Ethylene has many uses, including being a key ingredient in polyethylene, the most common plastic in the world.

While a final investment figure has yet to be agreed upon, ExxonMobil said it would be a “multibillion-dollar” project and would come online in 2023, the statement said. The facility would help meet expected demand growth for chemical products in China,” the statement explained.

It comes just two months after Germany’s BASF, the world’s biggest chemicals company by sales, signed a memorandum of understanding to build a $10 billion complex in Guangdong. That deal came on the back of Premier Li Keqiang’s visit to Germany, which saw around 20 billion euros ($23.2 billion) of deals signed.

Both plants look to take advantage of the Pearl River Delta’s prime position as a major manufacturing hub, a legacy of its status as the first area to begin experimenting with foreign investment through the reform and opening-up policies from the late 1970s that catapulted China’s economic transformation. While other provinces followed suit in opening up, Guangdong remains a bastion of production and China’s richest province. Its $1.33 trillion gross domestic product last year was around the same size as Spain’s.

Both ExxonMobil’s and BASF’s planned refineries will be built on the assumption that Chinese demand for petrochemical products is going to continue expanding at a rate that major producers in the U.S. and elsewhere cannot keep up with, said Steve Jenkins, vice president of consulting at Wood Mackenzie Chemicals.

“There is uncertainty over how long supplies from the last round of (steam) cracker development in the U.S. will last, and several Asian companies are starting to build their own cracking facilities closer to home,” he said. “The big Chinese state-owned enterprises are tied up with upgrading their existing transport-fuel oriented facilities, so the government is allowing the most advanced private-sector companies to take the lead in supporting the development of the next generation of manufacturing-oriented refineries in Guangdong.”

Ethylene is not on the list of U.S. imports facing tariffs in China as part of the countries’ ongoing trade tensions, although many of the materials used in its production, such as propane, butane and naphtha, are subject to tariffs. Jenkins does not believe these concerns will have weighed on the ExxonMobil deal, however. “These projects take years of deliberations before anything is announced, and that is occurring during the trade war is coincidental.”

Trade tensions continue to weigh on the countries’ potentially stronger relationship regarding LNG imports however. “U.S. LNG exports to China fell to their lowest levels of the year in July and remained relatively low in August as well,” said Jeff Moore, a LNG analyst with S&P Global Platts “According to Platts’ ship-tracking data, China only took two cargos of U.S. LNG a month in both July and August.”