Officials, Academics Look Back, Ahead After 40 Years of Reform 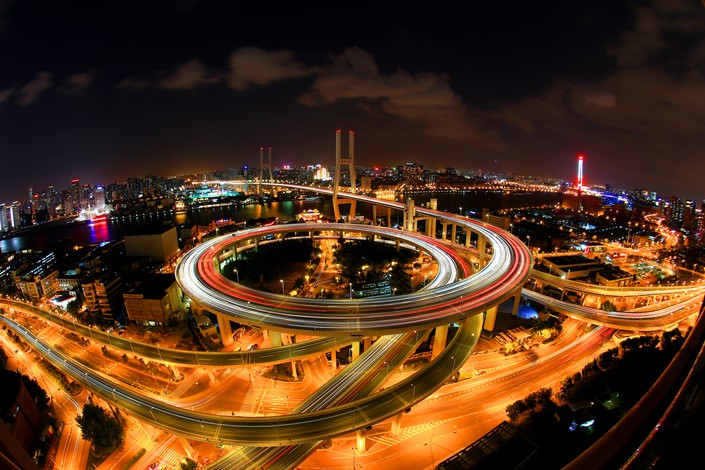 As this year marks the 40th anniversary of China’s economic reform, policymakers and academics have been busy at conferences assessing the country’s reform path.

A number of high-profile events have made headlines this month, bringing together top policymaking minds and business elites from China and abroad to discuss economic and trade topics of major concern. The most-watched gatherings include the China Development Forum over the weekend, which was organized by the State Council’s Development Research Center — the country’s top think tank — and the newly created China-U.S. Financial Roundtable, chaired by former Chinese central bank Governor Zhou Xiaochuan and former Goldman Sachs President John Thornton.

But a lesser-known academic event in Beijing during the weekend has caught attention with candid and critical comments from most respected economists and officials, including Vice Premier Liu He, a key architect of China’s current economic policy.

A conference of the Chinese Economists 50 Forum, an independent think tank initiated by some of China’s most prominent economists, including Liu, took place on Sunday and Monday in Beijing to commemorate China’s 40 years of economic reform, as well as the forum’s own 20th anniversary.

Having the theme “The New Mission in a New Era of Reform and Opening-Up,” the conference sparked heated discussions and exchanges of advice on reform. Below is a selection of some of the highlights.

Yang Weimin, deputy director of the Subcommittee of Economy of the Chinese People’s Political Consultative Conference

“Public doubts about reform have grown recently. Reform is a profound revolution for any society. Since it is a revolution, it will definitely not be smooth sailing. The new era doesn’t just require reform, it requires accelerated reform. And this doesn’t mean small reforms, but rather comprehensive deepening. This must not be empty reform — it must tackle the toughest problems. These must not be imaginary problems — there must be tangible results.

“What we’re currently seeing — low productivity and even a recent period of decline — is fundamentally caused by the fact that a large amount of resource allocation is still being decided by the government. Therefore, we must correctly tackle the relationship between socialism’s tendency to concentrate power in order to manage major undertakings, and the market’s ability to determine resource allocation. We should reduce the concentration of power slightly, significantly cutting the amount of direct government intervention and direct allocation when it comes to resources.”

“In the long run, China should play down and eventually eliminate its system of classifying ownership into state-owned enterprises, private enterprises and foreign-owned ones. The 19th Party Congress called for all enterprises registered in China to be treated equally by laws and policies.”

Lou said the focus of the labor force is to promote the free flow of labor, but recently, some places have moved in the opposite direction by ridding themselves of lower-skilled laborers to attract high-end talent. This is an important factor behind rising labor costs.

“Wiping out lower-skilled laborers will significantly increase labor costs,” he said. “This will inconvenience people’s livelihoods and the operations of high-end businesses, fueling potential immigration and relocation to other places.”

On financial governance, Lou said that when reducing leverage and risk, serious consideration needs to be given to capital market needs and what kind of business models to develop to better serve the real economy.

Wu Jinglian, researcher at the Development Research Center of the State Council

Wu said that the past 40 years of reform show the importance of adhering to market liberalization and legal reforms. In the past 40 years, China has seen improved quality and speed of national economic growth and the people’s welfare. If such reforms are not carried out smoothly, China’s modern socialist system will encounter setbacks, and progress will be slowed in all fields, he said. Wu said failure to put economic reforms in place will impact economic growth and transformation.

“Economic growth is driven by a lot of investments, which have resulted in excessive leverage and systemic risks. Under such circumstances, macroeconomic policies are difficult to implement. If you want to reduce the leverage, it will decrease the economic growth rate, and if you want to maintain a certain level of growth, then it will push up the leverage. This will increase the explosion of systematic risks,” Wu said.

“Chinese economists must widen their scope. We must not only care about China’s internal affairs, but also about the rest of the world. Whether China’s rise and national rejuvenation will be accepted by the world depends to a large extent on whether China’s development will create opportunities for other countries. In this respect, we must not only act but also speak,” Lin said.

“For example, the U.S. and China are engaged in a trade war even though we know that trade between us is a win-win situation. In such a situation, how can we help the U.S. public, as well as their academics and theorists, understand China’s development and the fact that the promotion of Sino-American trade will improve the living standards of ordinary people? China’s development and rise can provide greater profit margins for U.S. companies. This is a mutually beneficial situation.”

Sheng Hong said that general fiscal revenue grew at a faster rate than gross domestic product in the first half of this year, and the proportion is increasing. Land revenue was much higher in 2017 than in previous years.

“Many people have clearly pointed out that the recent so-called tax reform has in fact increased the macro tax burden by reducing personal income tax and transferring labor insurance and funds from the Ministry of Human Resources and Social Security Ministry to the State Administration of Taxation. This will bring two changes. First, the proportion of labor insurance collected is no longer calculated based on basic salary, but based on total salary, which actually has increased. Secondly, the nature of the State Administration of Taxation is fundamentally different from the Human Resources Ministry. It must be mandatory, actually increasing the insurance payment ratio in many places, and increasing the macro tax burden.”

Wu Xiaoling, chairwoman and dean of Tsinghua University PBC School of Finance, and former deputy governor of the People’s Bank of China

“The new mission of the reform is to incorporate the country into a legal system so that the rights granted to the people by the Constitution can be fully protected, and the government elected by the people can be legally authorized under the law. The country can also avoid social instability by adjusting the interests of all parties through legal measures,” Wu said.

“Only through a back-and-forth between the legislative body and judicial body of the country can we build up the foundation for social stability. Only by comprehensively following the rule of law can we prevent corruption effectively, and avoid falling into the vicious cycle of what’s known as ‘Huang Zongxi Law.’ Huang was a 17th-century philosopher and political scientist who studied the history of tax reform. He made the observation that tax reform often has unintended consequences of increasing the tax burden even though the state reduces taxes.”

Li Yang, chairman of the National Institution for Finance & Development, and former vice president of the Chinese Academy of Social Sciences

“There has been a public debate on the phenomenon of ‘the state advances, but the private sector retreats’ recently. I’d rather say it was a self-help measure amid mounting pressure of cooling economic growth,” Li said. “The drawback of such measure is obvious, as state-owned enterprises have less corporate efficiency than private enterprises. Although SOEs (state-owned enterprises) have been generating sound revenues currently, we should be aware that their performance is under the protection of policymakers.

“In fact, we are standing on the turning point of SOE reforms, and we have the road map in hand already. The first step is to inject capital and introduce favorable policies into SOEs while meanwhile relaxing the control on the management side. The second step is to carry out mixed ownership reform of the SOEs. These two measures both showcase the right direction of reviving the running of state-owned firms, but unfortunately they haven’t been implemented properly so far.”

Ma Jiantang, party secretary and vice minister of the Development Research Center of the State Council

“An article written by Wu Xiaoping triggered a lot of discussion in the past several days. (The controversy) is on one hand due to the rather confusing logic of his opinions carried by the piece. On the other hand, it is sparked by concerns over the state of private enterprises, and, … to put it in a more serious way, by the discontent about some economic policies. There is a lack of confidence (in the policies). People may be concerned about whether competition is fair, law enforcement is impartial, and property rights can be faithfully protected. Some complain that their tax burden is yet to be clearly reduced, and their access to loans is still very restricted. But the deeper cause (of the controversy) is how the private economy should be regarded.”

Editor’s note: Ma was referring to an article that went viral online on Wednesday suggesting that the private sector should “gradually withdraw” from the Chinese economy now that it has “completed its mission of assisting in the development of the public sector,” an apparent mockery of government policies favoring state companies. The article was written by Wu Xiaoping, a private business owner who used to be a senior manager at investment bank China International Capital Corp.

Song Xiaowu, consultant and former head of the China Society of Economic Reform

Song said the most important thing for China right now is how to evaluate the current labor market.

“I want to raise a statistic. Among the 420 million workers in the labor market, in urban areas about 280 million are migrant workers. That is to say, migrant workers represent nearly 70% of the workers in urban areas, 67.5% to be precise. In this kind of an employment market, the labor market is very skewed. When examining any country’s process of industrialization, none has exhibited this kind of double-track system of overall employment. In the end, the development of our labor market is a question that needs to be well-researched.”

Bai Chongen, dean of the Tsinghua University School of Economics and Management

Bai said some companies have received all kinds of assistance during their development process, and this can help them overcome institutional obstacles.

“We call this a kind of preferential model. In a situation where the system is still moving toward inclusiveness, where the business environment is not perfect, local governments provide special assistance and protection for certain enterprises so that these enterprises can overcome obstacles to development created by the bad business environment.

“While the system is still not perfectly inclusive, the preferential model still has its role, but the preferential model will not work in the long run. As the economy develops, the possibility of preferential treatment creating positive effects gets smaller and smaller. We must do our best to improve the inclusiveness of the overall system. But an important question is: What incentives should we provide in order to improve the inclusiveness of the system? At the same time, before we reach perfect inclusiveness, should we still tolerate some sub-optimal arrangements?”