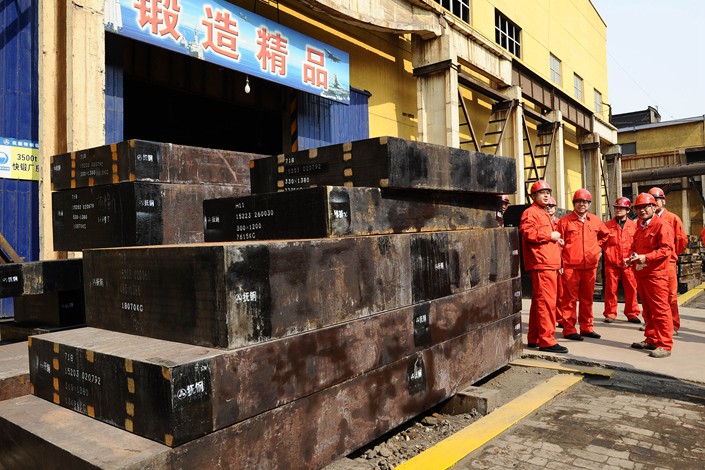 Workers take a break at a Fushun Special facility in Liaoning province on April 2016. Photo: VCG

A court has accepted the bankruptcy restructuring application of a debt-ridden unit of the country’s largest producer of specialty steel products that made headlines for misstating earnings for three straight years, Caixin has learned.

The latest restructuring proceedings will likely set off another battle among the company, its creditors, local officials, as well as hundreds of thousands of investors who bought Fushun Special’s stock.

Fushun Intermediate People’s Court of Liaoning Province accepted Fushun Special’s restructuring application on Thursday, according to a court statement seen by Caixin. The application was filed by one of its creditors, Shanghai Dongzhen Metallurgy Engineering Technology Co. Ltd., which claims Fushun still owes it 5 million yuan ($731,450).

The court’s acceptance kicks off the restructuring process for Fushun Special. Unlike the restructuring of its parent, which benefited from a bailout by a privately owned steelmaker, Fushun Special plans to restructure via a debt-for-equity swap — through which its creditors would trade their debt for a stake in the company, Caixin has learned from people familiar with the plan. Alternatively, an investor will be allowed to take shares in exchange for giving a capital injection, which the company can use to repay its debts.

Located in Liaoning in the heartland of China’s rust belt, Fushun Special has been a heavyweight producer of specialty steel products for its parent since the People’s Republic of China was founded in 1949. Specialty steel is used in sophisticated applications such as nuclear, military and space projects.

Once a jewel among its parent’s subsidiaries, Fushun Special came under scrutiny in the wake of Dongbei Special’s bankruptcy after an audit uncovered that the unit exaggerated its revenues and made “accounting errors” in three consecutive annual financial statements. As of the end of 2016, those errors had inflated Fushun Special’s net assets by more than 1.77 billion yuan.

As of Aug. 31, Fushun Special had 1.93 billion yuan in outstanding loans on its books, with Bank of China, the country’s fourth largest banks by assets, as one of its biggest creditors, Caixin has learned.

Shares of Fushun Special have been suspended since January after it admitted falsifying inventory numbers. On June 27, the Shanghai Stock Exchange issued the company a delisting warning after the latter reported two straight years of net losses as a result of correcting it financial statements.

Fushun Special’s shares slumped 4.91% on Friday after resuming trading following an eight-month suspension. After the holiday weekend, its shares fell another 4.97% on Tuesday to close at 4.97 yuan.