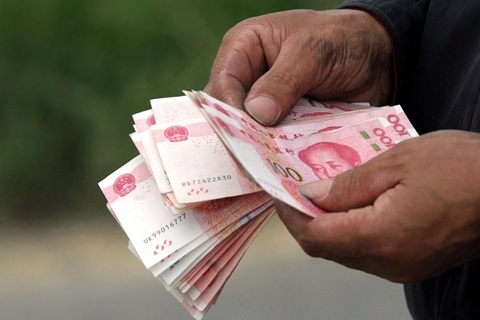 China launched its first national guarantee fund of 66.1 billion yuan ($9.6 billion) to support lending to small firms and farmers as part of the government’s campaign to expand funding for cash-starved areas of the economy.

At a ceremony Wednesday, the National Financing Guarantee Fund Co. Ltd. signed agreements with eight provincial-level guarantee and re-guarantee agencies and seven commercial banks including state-owned China Construction Bank, the Ministry of Finance said in a statement posted on its website.

The fund aims to encourage more financing resources for small and micro enterprises and the rural sector, taking advantage of the leverage of fiscal support, Vice Finance Minister Liu Wei said at the launching ceremony.

The Finance Ministry will establish a subsidy policy to reward the effective development of local government financing guarantees, the ministry said.

The fund, launched by the Finance Ministry and 20 institutions including major state-owned banks, will provide guarantees for loans of around 500 billion yuan over the next three years, or about a quarter of the total value of the country’s existing financing guarantee business.

The State Council said in July it would accelerate cash injections into the fund and announced a goal for the fund to support 150,000 new loans a year to small enterprises and drive 140 billion yuan in annual lending.

The fund is the Chinese government’s latest move to expand financial support for small enterprises amid slowing economic growth and rising trade tensions with the United States.

The ongoing deleveraging campaign has exacerbated the difficulties of small to medium companies in getting loans, prompting the government to announce measures this year to encourage lending to these sectors.

The People’s Bank of China (PBOC) late last month announced a series of policies to promote credit for small companies, including adding 150 billion yuan of relending and rediscount quotas for small firms and the agriculture sector, and lowering relending interest rates for small and micro enterprises by 0.5 percentage point.