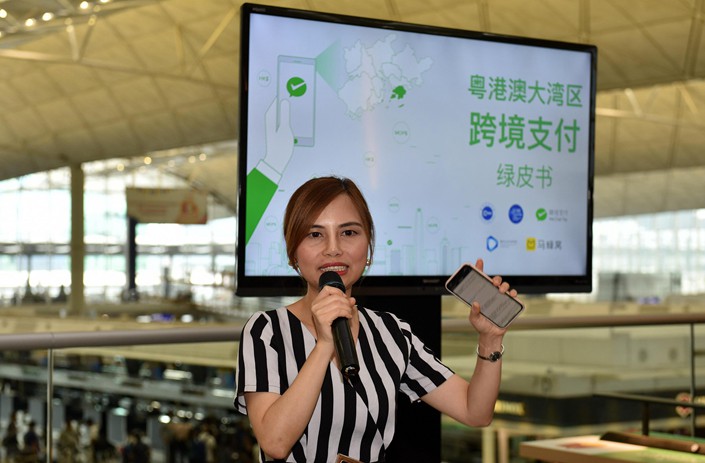 The first “green paper” on cross-border payments in the Guangdong-Hong Kong-Macau area was officially released on July 12. Photo: VCG

Gaming giant Tencent Holdings Ltd. will allow Hong Kong users of its popular WeChat-based payment service to make some purchases on Chinese-mainland-based platforms, seeking to broaden its appeal in one of its first overseas markets.

Tencent made the move in partnership with China’s UnionPay, whose global electronic transaction settlement network will be used to complete the transactions, the companies announced on Wednesday.

WeChat’s payment service works like a debit card, allowing users to connect their local bank accounts to their phones and then make payments using QR codes on their screens. While Tencent has made WeChat payment available for its mainland users in a wide range of international destinations, it had not taken similar steps for Hong Kong-based users who settle their transactions using their own local currency, the Hong Kong dollar.

The new service will limit the size of payments by Hong Kong travelers on mainland items, reflecting China’s strict controls on the movement of currency across its borders. If a user does not register personal information, the amount of his or her mainland transactions using the electronic wallet account cannot exceed HK$25,000 ($3,200), and single transactions are limited to HK$10,000.

The move is part of an effort by Tencent and top payments rival Alipay to extend their reach to customers outside China. Both are now wildly popular in their home market, helping consumers in many big cities to go largely cashless. But they have had far less success outside, using most of their foreign operations to date to serve overseas Chinese travelers.

Tencent opened its electronic wallet services to Hong Kong residents in 2016, and also has similar service for local residents in Malaysia.

In Hong Kong the company has faced an uphill road popularizing the service due to stiff competition from cash, debit and credit cards. It also faces competition from Octopus, a homegrown local payments card that is available on the city’s large public transport system and many of its major retail chains.