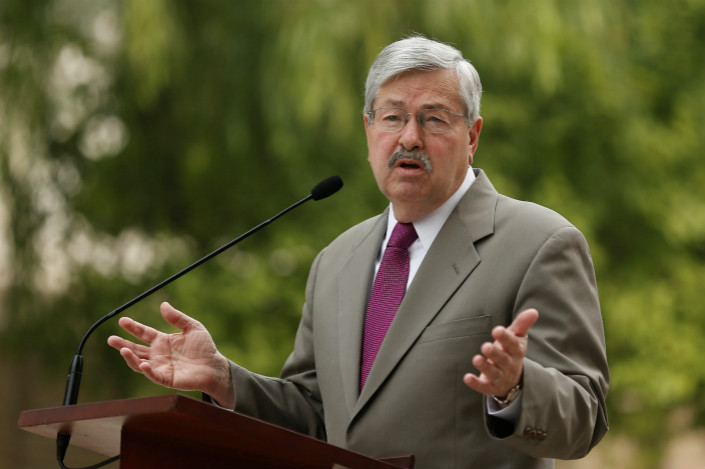 Washington’s top diplomat in Beijing has accused China of “bullying” for criticizing American tariffs against Chinese goods in a newspaper ad in Iowa, his home state that is emerging as a major casualty of the Sino-U.S. trade war.

Terry Branstad’s critical commentary in the Sunday edition of the Des Moines Register, based in the Iowa capital, was published a week after a four-page supplement appeared in the same newspaper sponsored by the China Daily, the English-language official newspaper of the Chinese government.

That supplement included lengthy pieces about losses the U.S. is suffering from the bilateral trade spat, with headlines such as “Duel undermines benefits of trade” and “Dispute: Fruit of a president’s folly.”

Branstad’s criticism came after U.S. President Donald Trump accused China of trying to interfere in upcoming elections in November, without citing any evidence.

“In disseminating its propaganda, China’s government is availing itself of America’s cherished tradition of free speech and a free press by placing a paid advertisement in the Des Moines Register,” Branstad wrote in his commentary published by the newspaper on Sunday.

Its heavy reliance on agriculture has made Iowa one of the hardest hit states in the tariff dispute with China. The state is second in the U.S in production and exports of soybeans, and China is the world’s largest importer of soybeans. Iowa is the ninth-largest producer of alfalfa, a feed for cows that is also getting hit by China’s retaliatory tariffs, figures from the U.S. Department of Agriculture showed.

Iowa has 456,300 jobs supported by trade according to a recent report by the U.S. Chamber of Commerce. Its exports threatened by Trump’s trade war with other countries are estimated to be worth $1.4 billion, including $543 million in shipments to China. The value of Iowa’s soybean exports to China affected by the spat is expected to exceed $30 million, the report said.

Branstad said China’s tit-for-tat tariffs on American products in retaliation for U.S. taxes on Chinese goods “harm American workers, farmers and businesses.” He added that Beijing was “now doubling down on that bullying by running propaganda ads in our own free press.”

The China Daily supplement drew attention from Trump himself, who last week posted pictures of the advertorials on his Twitter account, adding: “China is actually placing propaganda ads in the Des Moines Register and other papers, made to look like news.”

At a United Nations Security Council meeting he hosted last week, Trump accused China of attempting to interfere in the 2018 midterm congressional elections and alleged that Beijing is trying to help his opponents. He did not provide any evidence to support the claim, and China’s Ministry of Foreign Affairs has denounced the accusation as “totally far-fetched and fictional.”

Branstad was the longest-serving governor of Iowa in U.S. history, with six terms and 22 years leading the agricultural state. Now 71, he was serving his first term as governor in 1985 when Chinese President Xi Jinping visited the state. Since then, Xi has made one return visit, in 2012, and has also invited Branstad to China twice.

Observers and American businesses were widely upbeat on relations between China and the U.S. when Branstad became the new ambassador in Beijing last year. Most people believed that his extensive related experience could help to bridge what many worried might be big differences between Xi and a China-wary Trump. But some also cautioned that he may have to tone down his Iowa folksiness and subvert his personal relationships to the agenda of the new U.S. president.