Update: U.S. Says China Not a Currency Manipulator, but Has Been Bad — Very Bad 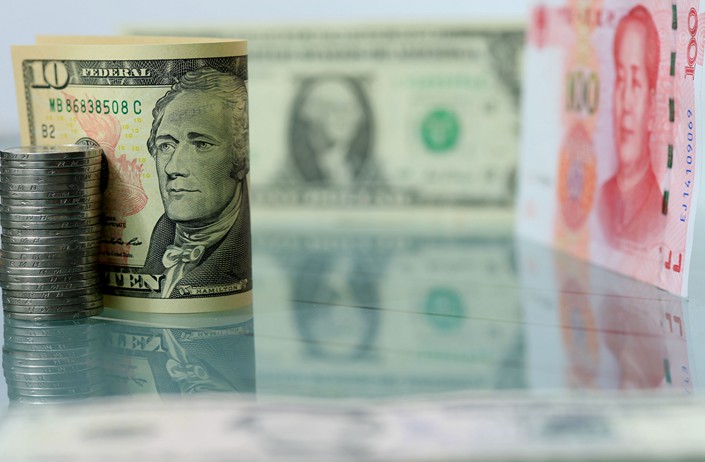 The U.S. Treasury Department said the China-U.S trade imbalace was exacerbated by nontariff barriers, nonmarket mechanisms, the “pervasive” use of subsidies, and other “unfair practices.” Photo: VCG

(Beijing) — China is not manipulating the yuan, the U.S. Treasury Department said, staving off fears that the trade war between the two countries could mutate into a currency war.

The much-anticipated report, released late Wednesday in the U.S., raises concerns about China’s lack of transparency in its currency management and an “excessive” trade imbalance, however.

There had been speculation the report would claim that China has been deliberately depreciating its currency to gain an advantage in the trade war. The yuan, which has weakened 9% against the U.S. dollar over the last six months, hit a 22-month low against the greenback Thursday morning. A weaker yuan, also called the renminbi, reduces the price of Chinese exports, making them more attractive.

U.S. President Donald Trump has repeatedly attacked China for weakening the yuan for this reason, saying he would ask the U.S. Treasury to designate the country a currency manipulator.

Though the report did not do this, it did say the U.S. Treasury remains “deeply concerned” by the trade imbalance between the two countries. This imbalance was exacerbated by nontariff barriers, nonmarket mechanisms, the “pervasive” use of subsidies and other “unfair practices,” the report said.

“We will continue to monitor and review China’s currency practices, including through ongoing discussions with the People’s Bank of China,” Treasury Secretary Steven Mnuchin said, adding that China’s lack of transparency and the yuan’s recent weakness are particular concerns.

“The persistent depreciation of the renminbi will do more harm than good to our country,” Premier Li Keqiang said in September. “China will never go down the path of stimulating exports by devaluing its currency because it would come at the price of harming our environment without offering much benefit.” China’s central bank governor, Yi Gang, also said Saturday that China will not use the exchange rate as a tool in the trade war.

Criteria established by Congress for designating a country a currency manipulator include: a trade surplus with the U.S above $20 billion; a current account surplus of at least 3% of gross domestic product; and “persistent one-sided intervention” in the foreign exchange market. China met only the first criterion, with a goods trade surplus of $390 billion over the four quarters through June 2018, according to the report. The U.S. last labeled China a currency manipulator in 1994.

Germany, India, Japan, South Korea and Switzerland also made the list of countries the U.S. Treasury was concerned about, though none was deemed a currency manipulator. However, China was mentioned much more than the others. “Treasury remains deeply concerned by the significant trade imbalances in the global economy,” the report said.

Tensions with the U.S., signs of an economic slowdown and a narrowing gap between the U.S. Federal Reserve’s and China’s respective interest rates are putting pressure on the yuan, which is now approaching a key psychological barrier of 7 per dollar. While the Fed has raised interest rates every quarter since December, China’s central bank, wary of increasing the cost of borrowing amid slowing growth, has not followed with equivalent hikes.

The Treasury’s decision doesn’t signal any broader easing of U.S.-China relations, said Andrew Polk, a partner at Beijing-based advisory firm Trivium China, who was unsurprised by the report’s findings. It would be a “very tortured legal case” to designate China a currency manipulator, he said.

But while the currency issue is certainly not settled, and will remain a key part of future negotiations, “the U.S.-China relationship needed a small win,” he said.

Under China’s managed exchange-rate system, the yuan can trade up to 2% above or below a daily parity rate set each day by the central bank. Since the yuan’s sharp depreciation began in April, the central bank has taken several steps to support the currency, including the reintroduction of a “countercyclical factor” in August to give the bank greater control over the parity rate.