China Will Lend to Debt-Choked Pakistan, But Won’t Bail It Out 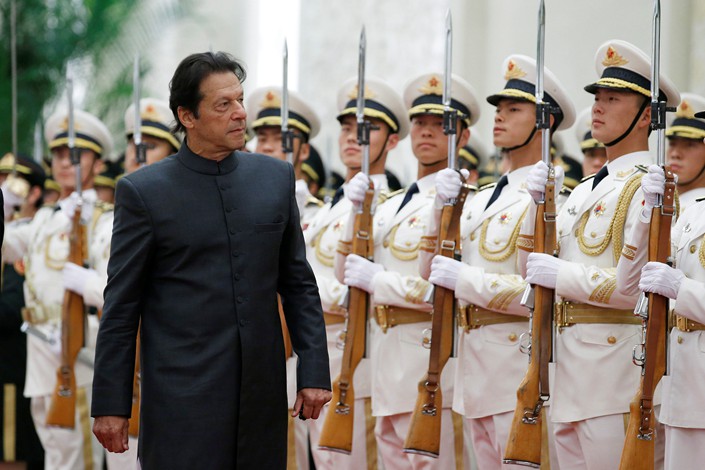 Pakistani Prime Minister Imran Khan failed to secure a major public commitment of financial support on his first state visit to China, with leaders from both countries appearing cautious despite promising to strengthen their “all-weather” partnership.

During his election campaign earlier this year, the cricket-star-turned-politician Khan and his Pakistan Tehreek-e-Insaf (PTI) party questioned the viability of the roughly $62 billion worth of planned Chinese-backed infrastructure projects that form the “China-Pakistan Economic Corridor” (CPEC), a stance that caused consternation in Beijing. Last month, Pakistan cut the size of a railway project by $2 billion amid fears of the debt burden it would bring.

Yet there does not appear to have been any major revision to the countries’ partnership in the wake of Khan’s visit, which was Friday to Monday. A joint statement released on Sunday said, “Both sides dismissed the growing negative propaganda against CPEC and expressed determination to safeguard the CPEC projects from all threats.”

However, the Chinese Foreign Ministry suggested that it will adapt the nature of its support to Pakistan, with Vice Foreign Minister Kong Xuanyou telling reporters that the CPEC will “tilt in favor of areas relating to people’s livelihoods,” according to media reports. Khan’s election platform called for greater emphasis on poverty alleviation efforts rather than infrastructure development. The statement said 16 new strategic agreements had been signed, but did not provide details.

“This was partly a trendsetting and sounding-out visit” and one in which Beijing hoped to determine “the priorities of the new government, as they were getting some mixed messages during PTI’s election campaign,” said Andrew Small, a fellow at the German Marshall Fund of the United States and an author of a book on Sino-Pakistani ties.

“The Chinese government appears to have been accommodating in a lot of ways, so long as existing contracts weren’t canceled and there was some openness from China about reorienting its policy in other areas, although the details need to be fleshed out.”

Harish Natarajan, chief economist at AKE International, said: “From China’s perspective, Pakistan is a useful as a transport corridor. It is also a counterbalance to India — a relationship that is growing increasingly fractious as Delhi and Beijing compete for influence in South Asia and in the Indian Ocean.”

Yet Khan appears to have failed in his mission of gaining additional financial support from Beijing, one of the priorities of the trip. His government is looking to avert an economic crisis brought about by dwindling foreign reserves, which in recent weeks have fallen to the equivalent of just seven weeks of imports.

Last month the country made a formal request to the International Monetary Fund (IMF) for an aid package of between $6 billion and $12 billion, which, if approved, would be Pakistan’s 13th IMF bailout package since 1988. In October, Islamabad secured $6 billion in financing from Saudi Arabia. Yet as of Monday, no major Chinese commitment appeared to be forthcoming.

“To date there has been no offer of financial assistance from Beijing that Khan was hoping for,” said Mohan Malik, a professor at the Asia-Pacific Center for Security Studies. “China would not want to bear the burden of propping up its ally alone and would like Pakistan to get assistance from other countries and possibly the IMF bailout, but without compromising Chinese interests in the CPEC projects and without revealing terms of those deals.”

While China wants to maintain its historically strong ties with Pakistan, it does not want to enter a situation in which the country would be overly dependent on Beijing’s financial support, Small said. “One view from the China side is that Pakistan would benefit from making some of the difficult economic steps another IMF program would require, and it would have been a concern for Beijing if Pakistan had tried to extricate itself from such efforts.”