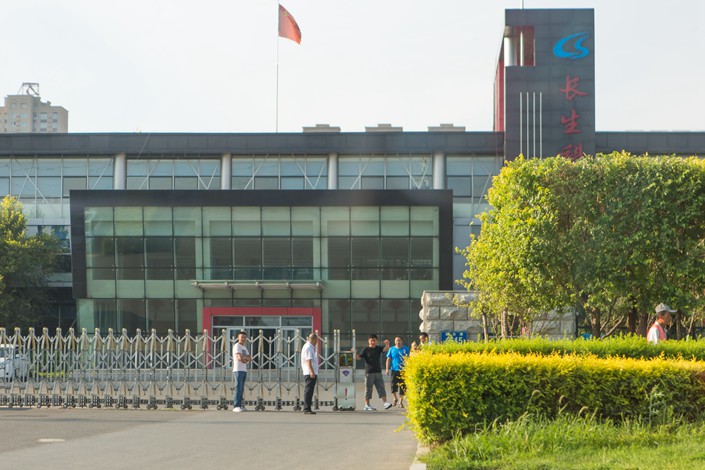 * The China Securities and Regulatory Commission fined the company an additional 600,000 yuan, and it banned four executives for life from running a publicly listed company

(Beijing) — The high-profile scandal of Changsheng Bio-Technology Co. Ltd., which fabricated data on its vaccines for infants, has left the vaccine-maker on the cusp of getting booted from the stock exchange.

The Shenzhen Stock Exchange said on Friday that it has begun the delisting process (link in Chinese) for Changsheng Bio-Technology because the vaccine-maker “engaged in major illegal activities” that jeopardized national security, ecological security, production safety, or public health and safety.

The announcement came on the same day that the country’s two major bourses, the Shanghai and Shenzhen stock exchanges, issued the final versions of tough new delisting rules. Under the new rules, companies will be delisted for engaging in fraud, violating disclosure requirements, or engaging in actions that damage national security, public safety, workplace safety or the environment, according to a statement published simultaneously by the two exchanges on Friday.

The exchanges added the part about damaging public health to the rules in their draft on July 27 in response to the vaccine scandal, experts said. The public comments on the draft release in March made no mention of it.

If delisted, Changsheng would become the first company to be taken down under the new delisting rules. Changsheng’s stock is already under “Special Treatment” status, a label given to firms in financial distress or facing regulatory problems. The Shenzhen Stock Exchange panel that reviews listed companies will release its final delisting decision in 15 days, the exchange said. Once the decision is made, investors will have 30 trading days to sell off their holdings in the company.

Because of the scandal, Changsheng has been in the spotlight for nearly five months. The company, based in Northeast China’s Jilin province, was accused of producing and selling nearly 500,000 substandard doses of its vaccine for diphtheria, pertussis and tetanus, a group of bacterial diseases. It was also accused of fabricating data on a rabies vaccine that is primarily given to babies.

Changsheng has since halted production at its facilities. In July, police arrested 18 of its employees. On Oct. 16, China’s Food and Drug Administration (FDA) fined the company more than 9.1 billion yuan ($1.31 billion) and revoked its production license.

Separately, the China Securities and Regulatory Commission fined the company an additional 600,000 yuan, and it banned four executives for life from running a publicly listed company for violating disclosure requirements related to the vaccine scandal. One of the four executives was Chairwoman Gao Junfang.

Changsheng’s stock price collapsed from 24.55 yuan a share on July 13 to 3.94 yuan as of the market’s close on Friday, the last day it traded. The exchange suspended trading of the company’s shares on Monday due to the potential delisting. About 24,800 investors still hold Changsheng’s shares, according to the company’s quarterly financial report, which was released on July 10.

Despite the government fines and bad press this year, Changsheng’s shares had risen by the exchange’s 5% daily limit for six straight trading days since Nov. 8, most likely due to a renewed interest in potential shell companies as regulators have indicated they might soften their stance on backdoor listings.

But as for Changsheng, which means “longevity” in Chinese, regulators don’t appear willing to leave that option open for the company. The Shenzhen Stock Exchange said at a media briefing on Monday that it will put the company under increased scrutiny that will limit the hyping of its shares.