Chemical Plants Had Swallowed Up Villages Affected by Fujian Spill 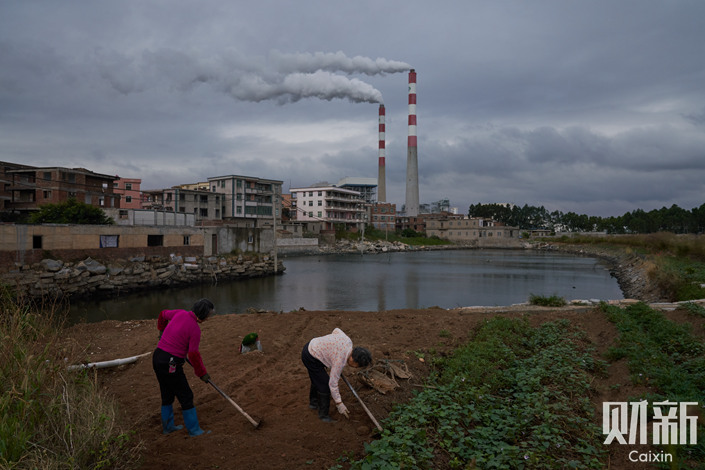 Two elderly women plant sweet potatoes on Nov. 13 in Quangang district’s Kecuo village, which is slated for demolition. A nearby pyroelectric plant is seen in the background. Photo: Liang Yingfei/Caixin

To locals who farm and catch fish for a living, the Nov. 4 leak that dumped nearly 7 metric tons of petrochemicals into a harbor in Quanzhou, Fujian province, was inevitable.

The villages of Quangang district, where the spill happened, have depended on the sea for generations. But they have faced increasing encroachment by the area’s growing petrochemical industry in recent decades.

Fujian United Petrochemical Co. Ltd. opened up Quangang’s first plant in 1989. Since then, millions of tons of refinery capacity have been installed in the area, along with transportation terminals and dozens of storage tanks.

In Shangxi village, some homes are only 100 yards away from petrochemical tanks. A liquefied gas pipe belonging to Huaxing Petrochemical Co. Ltd. runs through the center of the village. Luntou village used to sit to the north of Shangxi, sandwiched between China International United Petroleum & Chemicals Co. Ltd. and Quanzhou Thermal Power. Residents endured serious air pollution until 2012, when Luntou was demolished and its inhabitants relocated.


Transport vessels frequently leak small amounts of oil on their way to and from the petrochemical terminal, villagers said after the leak on Nov. 4. Xiao Guangming (not his real name), a resident of Xiaocuo village, said he had observed the survival rate for farmed fish falling from around 70% to less than 10% over the past two years.

Nevertheless, fish farmers in the area had still been able to profit from high fish prices — until the leak killed much of their stock and made the surviving fish unsellable.

Quangang’s agriculture authority issued a warning on Nov. 5 suspending sales and use of aquaculture products from the water near Xiaocuo. Villagers have stopped fishing in the area and have also stopped feeding the fish that survived the initial effects of the spill, Caixin learned.

Relocation seems to be the only remaining option for Quangang’s communities. In May 2017, work began on relocating more than 13,000 homes across 17 villages in the district. A year later, most of the villages that aren’t directly by the sea are now deserted. But the households on the waterfront are still fighting to stay.

Xiao Guangming was still in Xiaocuo tending to his fish farm nine days after the leak, partly because he was unwilling to move in with his children in the city as he feared becoming a burden for them. Luntou residents, who were relocated in 2012, are still waiting to receive their new homes, Caixin learned.