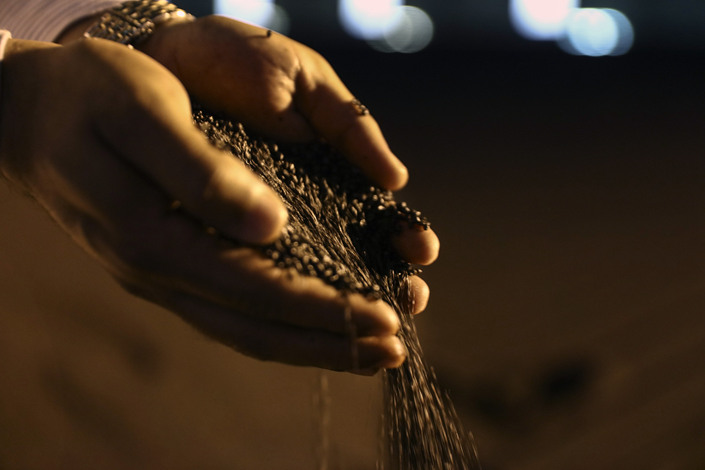 A worker grasps a handful of phosphate granules at a storage facility in November 2016. Photo: VCG

A consortium of Chinese state-owned enterprises have signed an agreement with their Algerian state-owned peers to invest $6 billion in transforming the North African nation into a phosphate exporting powerhouse while China moves up the value chain and shifts phosphate production abroad.

Phosphate is used to make agricultural fertilizer and also plays a role in the production of silicone and other products. Explaining the project’s rationale, Sonatrach’s CEO said, “the sharp fall of oil prices forced Algeria to adopt a new strategy that is based on diversifying its oil-dependent economy, and this mega phosphate project is in big step toward reinforcing this strategy.”

It also marks “the first major and important industrial project that Algeria has launched in nearly a decade,” Ouyahia said. How the project would be financed was not revealed. Construction will begin in 2019 and production is expected to come online in 2021, earning Algeria an estimated $1.9 billion a year. There is also a gas extraction component to the project, although no details were given as to its scope.

The project will see CITIC and phosphate mining giant Wengfu Group Co. Ltd. take an estimated 49% stake in the project, according to an earlier release from Xinhua, with Sonatrach and a state-run fertilizer manufacturer Semidal-Manal, taking the remainder.

China was the world’s biggest producer of phosphate by some way last year, accounting for 53.2% of sulphate rock mined, according to the U.S. Geological Survey. But the state is trying to wean itself off production in a pivot toward less polluting, higher value-added industries, analysts said. The government cut subsidies for the industry in 2015, according to Fitch’s China Agribusiness Report.

The Algeria deal “is exactly in line with China’s shifting strategy on trade,” said Even Pay, a senior agriculture analyst with Beijing-based advisory firm China Policy. “China has been a long-term, major producer and user of phosphate fertilizers. But China’s reserves are limited, and the environmental impact of the industry is high,” she said.

“China will be happy to have more of these fertilizers on the global market. It China wants to move up the global value chain, that is, providing the capital, technology and expertise to produce phosphate fertilizer elsewhere,” she added.

Wengfu Group also involved in phosphate projects in Saudi Arabia, Togo as well as Nigeria and Ghana, according to Morocco-based think tank the OCP Policy Center, in a similar push to take its business abroad.

The consortium’s representatives will meet again in December to finalize a shareholder agreement, according to the state media reports.

While Algeria officially joined China’s Belt and Road Initiative, which aims to develop trade, energy and transport infrastructure with Chinese assistance, in September, the deal does not appear to fall under the initiative’s aegis.