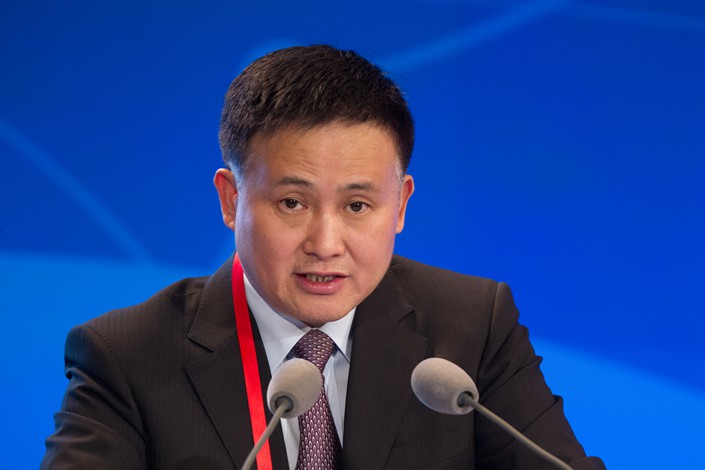 Pan Gongsheng, deputy governor of the People’s Bank of China, said fintech companies can’t use technological innovation to disguise the fact that they are conducting financial activities. Photo: VCG

Central bank Deputy Governor Pan Gongsheng said that financial technology (fintech) companies should be strictly regulated, and companies can’t use technological innovation to disguise the fact that they are conducting financial activities.

Speaking at a forum on Saturday, Pan also reiterated the government’s attitude toward its increasing scrutiny over the nation’s fintech sector, especially for illegal activities involving unqualified peer-to-peer (P2P) online loans and cryptocurrencies.

“The internet finance and fintech industry sees the same financial risk as the traditional finance industry, and bear even more risks, which are brought by the internet, technology, data and information safety,” Pan said. “In this sense, the fintech sector should be subject to even stricter regulations.”

Over the past year, some institutions have carried out illegal fundraising scams, and “the chaos of cryptocurrency speculation and peer-to-peer online lending turmoil had emerged,” Pan said. “These are lessons we can learn from.”

Pan pointed out that as initial coin offerings (ICOs) are being cracked down on globally, another form of fundraising — security token offerings (STOs) — have emerged. “No matter what rhetoric they use, they are both essentially illegal financial activities,” he said.

STOs are similar to both ICOs and traditional securities. While ICOs are cryptocurrency tokens that are sold by companies to the public to raise funds, STOs are tokens issued based on underlying assets with legal protections, potentially creating a safer investment environment.

“Speaking of technology, STOs are potentially an efficient and secure form of fundraising through issuing securities,” said Tian Chuan, a researcher in the blockchain industry. He said that the government’s main concerns are centered around the potential threat cryptocurrencies could bring to the nation’s monetary policy, but the government does encourage the innovation of “using blockchain technology to increase efficiency and reduce cost for nonfinancial products.”

Regulatory authorities have been taking measures to rein in fund-raising activities through tokens. In September, China officially declared ICOs illegal and shut down platforms that facilitated such deals. The central bank this year again warned investors of risks associated with overseas cryptocurrency operators. Beijing’s local financial watchdog also said this month that STOs are illegal (link in Chinese), and that institutions should not promote related information, provide training or raise funds in the name of STOs.

In addition to the ongoing clampdown on cryptocurrency-linked fundraising activities, regulators across China have also worked to bring the loosely regulated P2P lending industry to heel after a string of scandals and fraud. As of last month, more than 5,200 P2P platforms nationwide have had difficulties meeting cash withdrawal demands, have seen their owners abscond with investor funds, or have been investigated by police, according to a report (link in Chinese) by third-party research firm Wangdaizhijia. The industry association in Shenzhen even prohibited local P2P platforms from recruiting new investors.

China’s strict scrutiny of the internet finance sector can be considered a measure to “prevent bad companies from expelling good ones,” said Tong Bee, founder of blockchain consultancy Panony.

“People in the (blockchain) industry still hope that regulators can give a go-ahead for ICOs or STOs after related regulations are set in place,” Bee said. “It is necessary for regulators to supervise the sector based on real situations without dampening the market’s enthusiasm for financial innovation.”