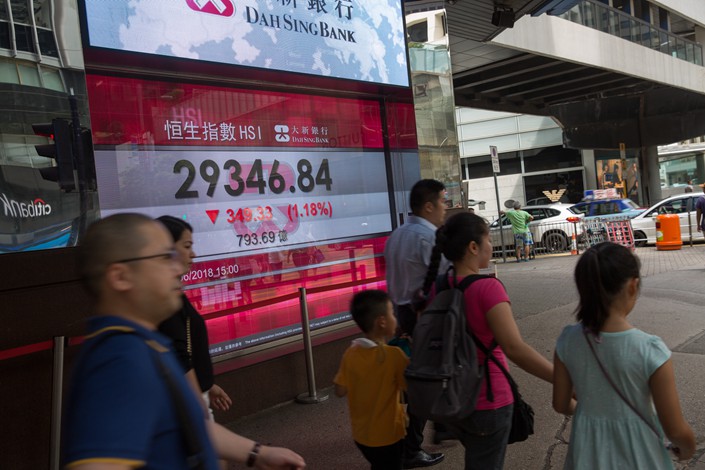 An electronic billboard in Hong Kong shows updates to the Hang Seng Index on May 21. Photo: IC

Hong Kong’s securities regulator expects to be able to identify mainland investors behind stock connect transactions by the end of March, as part of authorities’ efforts to crack down on wrongdoing in the market.

Securities watchdogs in Hong Kong and on the Chinese mainland have agreed to enhance the exchange of information under the Shanghai-Hong Kong and Shenzhen-Hong Kong Stock Connect programs to improve an initiative known as “the investor identification regime,” the Securities and Futures Commission (SFC) and the China Securities Regulatory Commission (CSRC) announced in separate statements.

The mechanism, which will allow Hong Kong’s securities regulators to access personal information of every mainland investor trading Hong Kong shares under the stock links, is scheduled to launch by the end of the first quarter of 2019, the SFC said in its statement Friday. “The regime helps enhance market surveillance and combat cross-boundary market misconduct under Stock Connect,” it said.

The CSRC will provide “necessary assistance for the building of the investor identification regime in the Hong Kong market,” the mainland regulator said in its statement (link in Chinese), also published Friday.

Under a similar arrangement in place since September, the Hong Kong Stock Exchange forwards the personal data of investors that trade mainland shares via the stock links to the CSRC and the Shanghai and Shenzhen exchanges. The personal information includes the investors’ name, identification type, identification number and the country that issued the identification. If any suspicious trading is identified, the mainland exchanges may take action, such as rejecting all orders associated with a unique number assigned by brokerages to each client, which is submitted to regulators, according to previously published rules.

The initiative was expected to improve the efficiency of cross-border surveillance of stock trading in the markets because prior to that, regulators asked brokerages about their clients’ identities only “as and when necessary,” according to a statement by the Hong Kong bourse in August.

The Hong Kong-Shanghai Stock Connect launched in November 2014, and the link between the Hong Kong and Shenzhen opened in December 2016.

Less than one month before the Hong Kong-Shenzhen stock link opened, the CSRC announced the first case of market manipulation under the Hong Kong-Shanghai connect, in which several investors illegally made more than 40 million yuan ($5.8 million) on a pump-and-dump scheme involving a stock available for trade over the link.