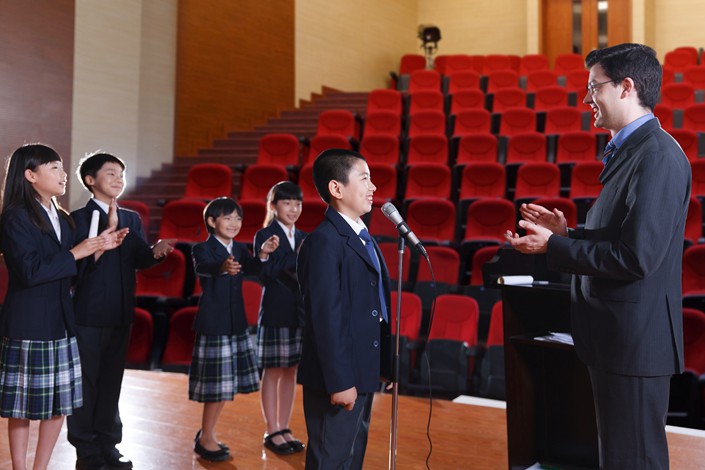 A massively popular state media-backed English competition has become tangled up in a national campaign to shrink students’ extracurricular workloads — and now one provincial government has effectively banned students from participating.

Children in East China’s Shandong province will not be allowed to join the local qualifying round of a “Star of Outlook” event because the organizers did not obtain government permission to hold it, Shandong education authorities announced Friday, without naming the organizers.

“Star of Outlook” is an annual national competition sponsored and broadcast by state TV network CCTV where children perform and answer questions onstage in English. The panel of judges that assesses them has in recent years included representatives from universities in the U.S. and U.K.

While the competition’s national finals are run by CCTV, regional selection rounds are often run by local governments and companies — some of them unauthorized, as the Shandong case has shown. Another group could theoretically get permission to run their own local qualifier, but local media reports are treating the news as a province-wide ban.

The popularity of the competition — which was viewed 24.7 million times last year on video streaming platform Youku — has encouraged companies to offer coaching camps and textbooks targeting contestants.

Shandong’s decision comes as China attempts to regulate the country’s massive extracurricular education industry, which has seen runaway growth in recent years due to rising urban incomes and increasing competition for places at top schools. The industry, which spans everything from after-school care to online video lessons, has come under fire for making childhood too stressful and exacerbating the divide between richer and poorer children.

Earlier this year, the Education Ministry published rules (link in Chinese) on education providers aimed at “reducing the extracurricular burdens of elementary and middle school students.” One of these rules banned organizations that hadn’t officially registered as schools from organizing exams or competitions.

The Chinese government has also long struggled to prevent public school teachers from illegally tutoring at private institutions for extra income, which parents have complained causes teachers to neglect their official duties.

Hundreds of thousands of after-school education providers have been “rectified” this year since the launch of the new rules, and more than 137 million out of China’s 180 million schoolchildren received extracurricular education in 2016, official news agency Xinhua reported.

Recently, China’s Ministry of Education canceled at the last minute the preliminary round of another competition, the mathematics-focused “Spring Cup,” upsetting parents and students who had poured time and money into preparing for it.