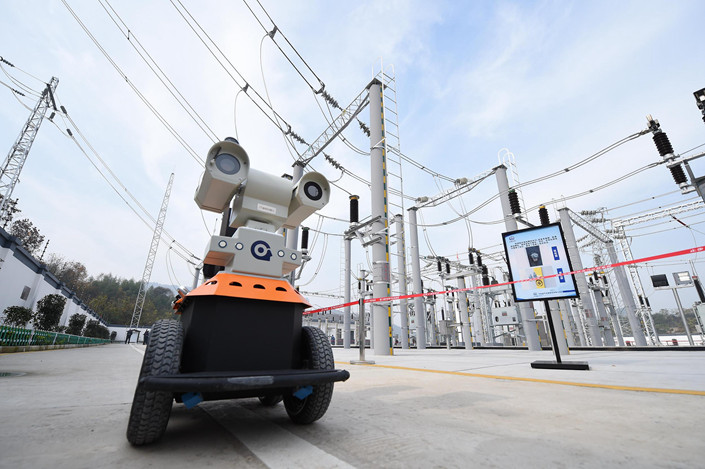 A robot inspects a power substation for a Hangzhou railway on Nov. 30. Photo: VCG

China must beef up the development of key technologies to protect its economic security, top lawmakers have said, condemning the country’s insufficient spending on research and warning of a foreign “stranglehold” on technology.

The Monday report (link in Chinese) from the Financial and Economic Affairs Commission of the National People’s Congress, China’s legislature, comes months after the country’s reliance on foreign technology suppliers was highlighted when Washington barred U.S. companies from selling to Chinese telecom-equipment maker ZTE Corp. due to sanctions violations, forcing the firm to temporarily suspend operations.

There are also fears that the recent arrest of a top executive from Huawei Technologies Co. Ltd. foreshadows a similar fate for ZTE’s bigger domestic rival.

Manufacturing’s share of the national economy has been declining at an “overly fast” rate, the report said. Manufacturing accounted for just 29.3% of China’s gross domestic product (GDP) last year, down from 32.9% in 2007, it said. It added that loans to the sector were too low and “do not match its weight in the economy.”

Although the share of equipment manufacturing and high-tech manufacturing — which are deemed cornerstone sectors of a country’s present and future competitiveness — in China’s industrial sector has climbed 7.7 percentage points over the past five years, their overall size is relatively small and cannot support the economy’s development, the commission said.

The report, which reviews the mid-term assessment by the State Council, or cabinet, of the implementation of China’s 13th Five-Year Plan that covers 2016-2020, also lashed out at the country’s weak innovation capability that has made itself vulnerable to foreign restrictions on key technology.

“The investment in research and development (R&D) is low; basic research is weak; and the self-developed innovation capability is yet to be strong. The application ratio of science and technology research outcomes in industry is yet to be high. In particular, the problem of the stranglehold on key and core technologies is outstanding,” it said.

The commission urged the government to maintain the proportion of manufacturing in the economy at a “reasonable” level and speed up industrial upgrading.

“(We must) strengthen the R&D of major, key and core technologies to effectively protect national industrial security,” the report said.

It also pointed out that progress on four of the 25 major indicators in the 13th Five-Year Plan is behind schedule, including the improvement of the share of R&D spending in GDP.

The other three indicators that are also disappointing are the increase of the share of the services sector in the economy, the limiting of the expansion of the quantity of land used for construction purposes, and the reduction of water pollution, according to the report.