China Has the World's Worst Stock Market With $2.4 Trillion Loss 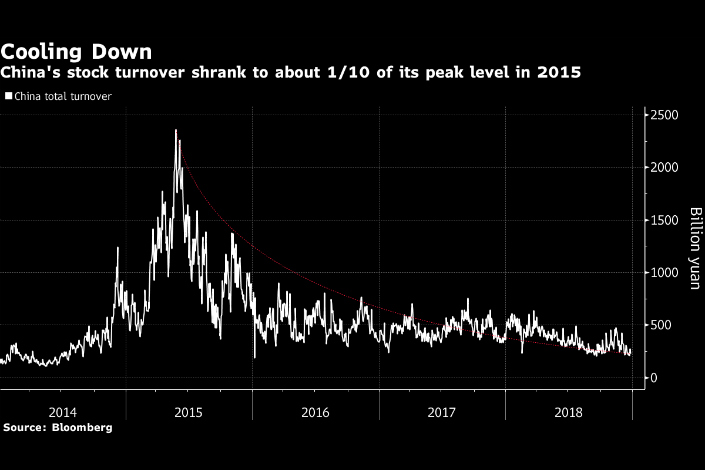 For China’s stock investors and forecasters, 2018 has been a gloomy year marked by unwelcoming milestones.

The benchmark Shanghai Composite Index is nearly 25% below where it started this year, making it the worst-performing major stock market in the world. The breakout of a trade war between the U.S. and China has wiped out $2.4 trillion this year, while a deleveraging drive has squeezed margin debt to just one-third of its peak in 2015.

While foreign investors continued to pour money into onshore equities via the stock connects and state funds were said to have bought exchange-traded funds to rescue shares, they did little to arrest declines. There was no place to hide with even the safe-havens losing ground, as the weak Chinese economy hurt spending and weighed on consumer stocks, while a vaccine scandal and a gene-editing controversy sparked a sell-off in the health-care sector.

Stock declines have shaved $2.4 trillion off China’s market value this year as of Thursday, the biggest on record since Bloomberg started compiling the data in 2002. The closest loss was during the global financial crisis 10 years ago, when the Shanghai gauge plunged 65%. China also ceded its place as the world’s second-biggest stock market to Japan earlier this year.

Investors haven’t been this disengaged with stock trading in years. Average daily turnover on both the Shanghai and Shenzhen exchanges fell to about 369 billion yuan ($54 billion) this year, the lowest since 2014, Bloomberg data show. Just 263.8 billion yuan of shares traded on Thursday, about 1/10 of its peak in 2015.

No sector was safe enough to shield investors from losses. All 10 industry groups on the CSI 300 index fell on the year, the broadest decline since 2011, according to data compiled by Bloomberg. That’s a stark reversal from last year, when all sector gauges rose.

China’s crackdown on financial leverage has achieved some results, at least in the stock market as speculators disappeared. Outstanding margin debt stood at 756 billion yuan as of Wednesday, as investors grew risk-averse. That’s about a third of its 2015 peak, when investors borrowed record sums to bet on further gains, fueling the great stock market bubble.

Burnt investors have hit the exit button. A total of 75 Chinese mutual funds with an equity focus liquidated this year, Bloomberg compiled data show — the most since 2007 when such data became available. That compared with the 88 equity mutual funds that were liquidated in total over the past 11 years.

New mainland listings usually surge in their early days of trading as regulatory caps on initial pricing makes it a bargain for investors. Stocks that debuted on domestic exchanges this year rose by an average of 193% in their first month of trading, Bloomberg data show. While that may not seem that bad, that’s just half the return seen in 2016, and it’s also the weakest performance in four years.