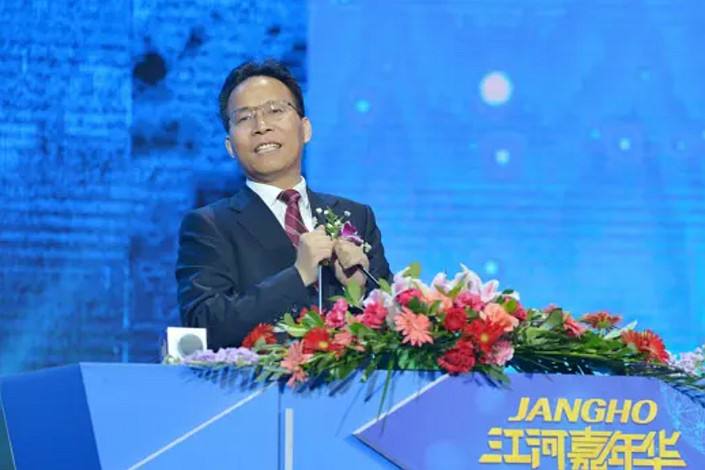 Liu Zaiwang at a company address in July. The billionaire built his wealth from construction, but is trying to diversify into Australian healthcare. Photo: Jangho

(AFR) — Liu Zaiwang's rags-to-riches story is shared by many of China's new generation of billionaires.

The young entrepreneur dropped out of university to start his own business in the 1990s as China's economy was taking off. He rode the wave of the country's construction boom after winning his first major contract on a high-rise building government building not far from the ski resorts in the northwestern province of Jilin in 1997.

Liu's company Jangho — which is now seeking to diversify into Australian healthcare with the A$2 billion ($1.43 billion) acquisition of Healius Ltd. — became a symbol of China's extraordinary building boom. It has manufactured the so-called “curtain wall” or outer steel and glass cladding for some of the country's most prominent high-rises and airport terminals as well as casinos in the former Portuguese colony of Macau.

The 2008 Beijing Olympics also underpinned the company's growth after spurring a string of building work. Jangho had already won major contracts in Beijing including the city's new airport terminal, China World Trade Centre and the headquarters for broadcaster CCTV. Liu expanded into the country's south and further afield to the Middle East, Southeast Asia and Australia.

But as China's construction market slowed, Jangho struggled to maintain the lucrative profit margins that underpinned its early growth.

At 46, Liu slipped more than 200 places on China's rich list to 787 last year, although his fortune remains considerable. Shanghai-based research house Hurun says Liu was worth 6.3 billion yuan ($922 million) in 2018, down from 7 billion yuan a year earlier. While the company's revenue growth has remained strong, net profits started declining in 2014 as margins were squeezed.

Like many Chinese billionaires, Liu keeps a low profile and shuns the media.

Warwick Smith, chair of the Australia-China Council, an Australian government advisory body, met Liu at an event in Sydney in June last year and says he was impressed with the Chinese entrepreneur's energy. "Like many Chinese entrepreneurs, he has a keen eye for value and trends... health services in many forms is one of those," Smith says.

Jangho has joined many other Chinese property and construction companies looking to diversify into higher-margin businesses such as healthcare. Analysts say Australia is particularly attractive because of the sector's attractive valuations and lower barriers to entry compared to the United States. But the move also comes with enormous risks.

“Acquisitions in a new sector can be a double-edged sword as it brings both opportunities and challenges. Business integration after the acquisition is a huge challenge for the management team and carries a lot of risks,” independent economist Song Qinghui says. “Judging by previous cases, there are a lot of uncertainties with cross-sector takeovers.”

Authorities at Shanghai's Stock Exchange, where Jangho is listed, have also raised questions about the company's finances following the sale of an 18.16 per cent stake in Hong Kong-based interior decoration and engineering firm Sundart. One local business newspaper suggests the company faces liquidity pressure and is trying to expand when it is short of cash. Jangho has denied this.

In a response to a query from the stock exchange, Jangho on Wednesday confirmed it planned to use the $HK1.49 billion in proceeds from the Sundart stake sale to help fund the Healius bid.

It also said the company had 2.9 billion yuan in cash and “abundant” cash reserves at the end of 2018, denying suggestions its cash supply was “strained”.

A letter signed by the company's board of directors also said the company does not have any major expenditure in the first quarter of the 2019 calendar year. “The cash obtained from this deal [Sundart] will be mainly used to facilitate the acquisition of Australian listed company Healius,” the letter said.

Jangho owns three listed companies. The main entity Jangho Group Co. Ltd. is listed in Shanghai with a market capitalization of 8.43 billion yuan, according to Bloomberg. As well as its major stake in Sundart it owns a stake in Hong Kong-listed Steve Leung Design Group Ltd.

Healius this week rejected a A$2 billion takeover offer from the Chinese group, which already owns a 15.9 per cent stake. Healius, which was previously called Primary Health Care, runs medical centres and pathology and radiology services. Liu has been expanding into Australian healthcare for the past three years. He acquired Australian ophthalmic chain Vision Eye Institute in 2015 and bought a stake in reproduction clinic network Monash IVF last year.