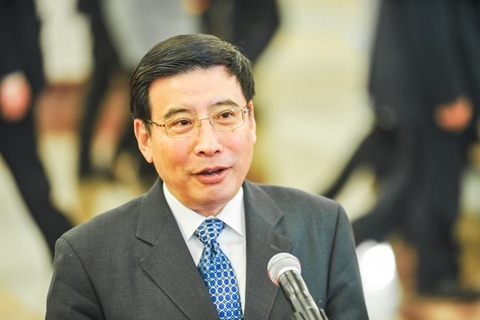 The state-owned memory chipmaker was listed by the U.S. Department of Commerce for export control in October, which effectively banned the Chinese company from buying components, software and other technology from the U.S. The ban will force Jinhua to halt production by March, the Financial Times reported this week.

Miao said “Jinhua is innocent” as it obtained the memory chip technology from its Taiwanese partner United Microelectronics Corp. (UMC), which should take responsibility in the dispute over trade secrets theft.

The Jinhua case marks another clash between the world’s two largest economies, which are embroiled in a trade war centered partly on U.S. accusations that China steals American intellectual property. Washington has taken increasing steps to block Chinese firms from obtaining U.S. technology, especially in the semiconductor space.

Jinhua is one of three domestic memory chipmakers assigned to help China reduce its reliance on some $200 billion of annual semiconductor imports. In May 2016, Jinhua entered a DRAM memory chip cooperation agreement with UMC. Under the deal, UMC would develop the DRAM technology and share it with Jinhua. In return, Jinhua would provide related equipment and fees totaling around $400 million, according to UMC’s annual report filing in 2017.

In October 2018, the U.S. Commerce Department put Jinhua on an export control list. The department accused the company of producing products whose technology most likely originated from the U.S., threatening the long-term economic viability of domestic U.S. suppliers to the country’s military.

The minister also called on the U.S. to remove Jinhua from the export control list.

Micron didn’t respond to Caixin’s questions on the matter.

Jinhua said earlier this week that it will file a complaint to be taken off the export control list and demand that U.S. authorities produce proof of the alleged transgressions.

The Financial Times reported Monday that UMC is likely to reach a settlement with the Justice Department involving large fines. UMC in November suspended its research tie with Jinhua.

Last April, ZTE Corp was hit by a similar ban from the U.S., which forced the telecom equipment maker to halt production for months until the ban was lifted in July. ZTE’s larger rival Huawei Technologies Co. is facing nearly two dozen criminal charges including fraud and trade secrets theft, according to two indictments unsealed by the U.S. Justice Department Monday.