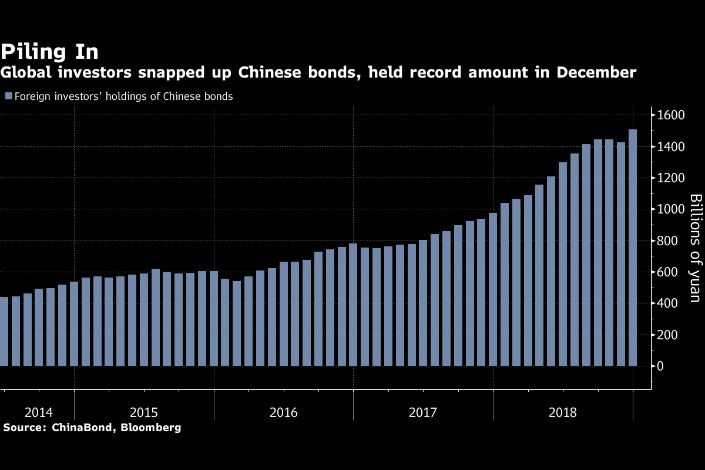 “My guess is that we will buy some once we get the settlement capabilities, but it’s not a high conviction sort of view,” said Brendan Murphy, who helps manage $37 billion at Mellon, a $482 billion asset manager based in Boston. The first step would be to buy “a small amount” of government bonds as the team gauges the market’s liquidity and trading conditions, he said in an interview in Sydney.

China has mounted a years-long campaign to boost foreign investment into its bond market, set to become the world’s second biggest, in part to counter downward pressures on the yuan’s exchange rate. While record inflows have indeed come, they have been dominated by central banks, rather than private-sector investors. Just how big the global demand for Chinese debt will be depends on the decisions by Murphy, his counterparts and their clients.

Chinese bonds proved a great diversification play in 2018, advancing steadily while many markets saw losses — reflecting the People’s Bank of China’s shift toward stimulus mode in contrast to tightening by the U.S. Federal Reserve. Foreign investors tend to prefer government and so-called policy-bank securities, issued by key state-owned lenders. Credit is more exposed to accounting-transparency issues, along with a record pace of defaults.

Chinese bonds have much less liquidity than major peers, something that’s given some investors pause. Goldman Sachs Group Inc. estimates that turnover for government bonds was 1.3 times in 2018, after annualizing January through September data. Treasuries turned over 4.6 times, while South Korean bonds came in at 3.4 times, Goldman analysts tallied.

China’s 2017 move to allow investments via the Hong Kong Bond Connect have made it easier for foreign investors to access the market, though logistics remain an issue for some, and a relative lack of hedging tools is also a concern.

Still, Goldman’s Kenneth Ho in December anticipated some $1 trillion in foreign inflows through the end of 2022. That would bring overseas ownership to about 6% of the total outstanding, from little more than 2% today, Ho wrote in a report.

One key dynamic that may affect flows is China’s exchange rate. The yuan’s appreciation in 2017 and early 2018 helped bolster foreign investor confidence. After a trade-tension induced slump in mid-2018, the currency lately has been on more solid ground.

For his part, Murphy in his global portfolio will be looking to pare back on risk during what may be a six to nine-month window of stability before what he sees as a likely resumption of Fed rate hikes. That could mean selling triple B rated corporate debt and buying single A or double As, or favoring government bonds over credit, he said.