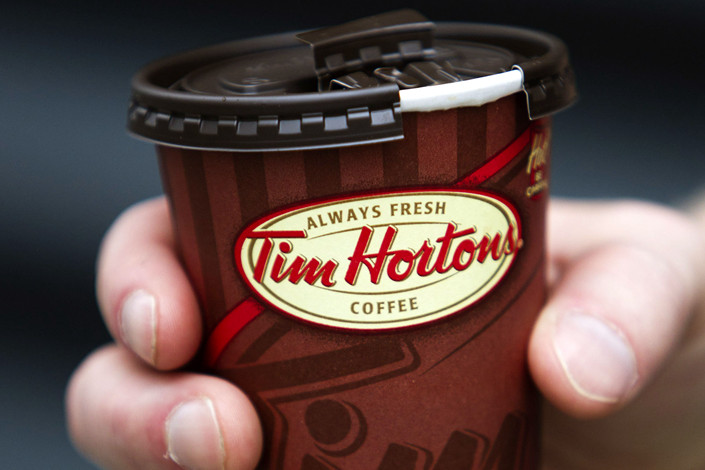 (Bloomberg) — Tim Hortons has arrived in China, joining the high-stakes battle to sell coffee in a massive country that mostly drinks tea.

The Canadian coffee-and-doughnut chain, run by Burger King-owner Restaurant Brands International Inc., plans to focus on “everyday value” as it muscles up against the ambitious China plans of Starbucks Corp., as well as other foreign and local players.

While more consumers may be giving java a shot, the coffee market remains relatively small. Only about a third of Chinese consumers bought hot coffee in 2017, according to a report from Kantar Worldpanel. Tim Hortons Inc. has its work cut out for it, said Jennifer Bartashus, an analyst at Bloomberg Intelligence.

“It’s a tough market,” Bartashus said. “Competitors have been there for a long time, and already established some sort of reputation with the consumer.”

While Tim Hortons is a beloved brand in Canada, it has struggled to build a following outside its home country. The chain, named for a Canadian hockey star, is opening its first Chinese shop on Tuesday in People’s Square, in Huangpu, Shanghai.

Tim Hortons joins a crowded field. Dunkin’ Brands Group Inc., Coca-Cola Co.’s newly acquired Costa Coffee and local chains, including Chinese startup Luckin Coffee, are already in the mix. Luckin expects to have 4,500 locations by the end of the year as it pushes toward a U.S. initial public offering. They all see an opportunity to boost sales as more people move to cities and join a growing middle class.

Starbucks has operated in China for two decades, but is pushing harder to find growth amid concerns that it’s peaked in the U.S. The chain opens a store in China roughly every 15 hours and has said that country will likely be a bigger market one day than the U.S., where it has more than 14,000 cafes. Starbucks, however is seeing slower growth in China, with transactions down 2% in its latest quarter. It’s hoping to reverse that with a big push into delivery with Alibaba.

“We’ve got a competitive edge,” John Culver, president of international and channel development at Starbucks, said in January. “We’ve set new standards for delivery of coffee to our customers and to customers throughout China” with splash-proof lids and tamper-proof packaging, he said.

Mandy Nian, a 26-year-old student in Shanghai, likes foreign coffee but hasn’t heard of Tim Hortons. She buys Costa when she’s going to the movies, taking advantage of a discount that comes with the purchase of a ticket. She’s willing to pay up because she views brands from outside China as “higher quality.”

“I can accept a little higher prices than the local brands,” she said.

Dunkin’, meanwhile, failed in two previous attempts to crack the market but is trying again with its namesake coffee brand — a favorite in Boston. The company has 39 locations in China, with plans to open 1,400 over the long term. George McAllan, vice president of international at Dunkin’, said local franchisees are targeting Beijing and Shanghai and working on new menu items. Costa Coffee has hundreds of locations in China. The chain — which Coke agreed to buy last year for $5.1 billion — is a big piece of the soda giant’s strategy to spur growth as consumers cut back on sugary soda.

Even KFC is betting on breakfast and a growing coffee business to help sales in China. The fried-chicken chain sold more than 90 million cups of it last year, exceeding company expectations. The Yum China Holdings Inc.-owned brand says it’s not slowing down with its network of 5,900 restaurants.

“We will continue to drive growth of this high-potential category by introducing innovative, high-quality products at a good price,” CEO Joey Wat said last month.

A recent economic slowdown in China put a spotlight on the difficulties for foreign brands banking on steady growth there. Research shows that Chinese consumers consider coffee more of a premium treat than a regular indulgence. But deals and discounts are becoming more prominent as local companies like Luckin push hard to take on Starbucks.

Jiani Zuo knows Tim Hortons but prefers local coffee. The 36-year-old brand director in Shanghai frequents a chain called Manner, which has low prices. Michael Li, another local coffee drinker, said he had been drawn to Luckin because of a “good discount.”