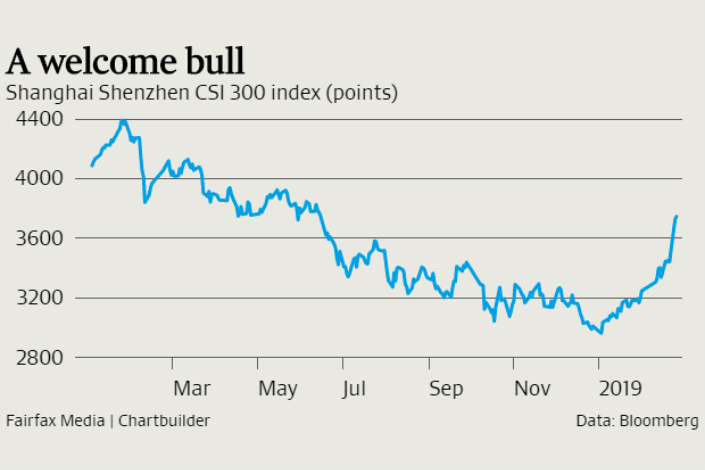 (AFR) — Despite its massive role in the global economy in the 21st century, Chinese stocks traded on the main exchanges of Shanghai and Shenzhen are subject to the types of booms and busts that would make most frontier markets blush.

This week there was a fine exhibit of this. On Monday having the word "securities" in the name of your company (and there are 30 such firms) was enough to ensure a gain of 10% for the session. "That's the kind of world we live in now," was the acerbic aside from UBS' local equity sales desk.

This was as the mainland exchanges added almost 6% on Monday, giving Chinese shares their best session in more than three years. The CSI 300, which is a weighted index of the 300 biggest mainland stocks, is now up more than 25% from its January lows. Trading volumes have jumped to the highest level since the Chinese share markets crashed so dramatically in 2015, according to Bloomberg.

The price action has flipped the script for Chinese equity investors: from being the worst performers in 2018 to the best in show this year.

Most foreign analysts slated this week's spike to US President Donald Trump’s pronouncement at the weekend that he would extend the deadline to further raise tariffs on Chinese goods beyond this week, citing “very productive talks” between the two sides. His tweet suggested “an agreement” on the trade spat would be reached when he meets his Chinese counterpart, Xi Jinping, at his Florida resort.

Poor trade headlines indeed have been a major drag on sentiment among Chinese investors, and contributed to falling asset prices and a slowing economy. And steadily improving news on this front this year has played its role in the powerful recovery in Chinese bourses.

Support from the top

But the real trigger for Monday's eyebrow-raising move was a front-page editorial in the China Securities Journal, a financial paper under the Xinhua News Agency and with close ties to the China Securities Regulatory Commission, Bank of America-Merrill Lynch strategist David Cui told his clients in a note this week.

“The editorial declared that capital markets will become an integral part of China's core competitiveness,” Cui said. “This is based on the paper’s interpretation of President Xi’s speech at a Politburo meeting held last Friday on improving financial services and preventing financial risks.”

Some took this as a sign from on high that it was time to buy stocks.

One strategist told Bloomberg that he “wouldn't jump off the wagon” despite Monday’s sudden gain. He continued: “Even the big boss is voicing support for the capital market. What else do you need for a reason to buy?”

BAML's Cui is less convinced, saying he “did not consider that conditions are ready for a bull market” and sticking with his recommendation that clients “sell into the rally.”

As for Monday's outsized leap in stocks bearing the word “securities” in their name, the reason was pretty straightforward, JPMorgan Asset Management Asia-Pacific strategist Tai Hui reckons. More trading makes for more commissions for firms providing broking services. As they say, what else do you need for a reason to buy?

Where to from here? The first thing to note is that despite the more than 20% move higher in prices this year, Chinese shares remain about 15% off their highs of last year.

And a number of factors in recent months help explain this year’s phenomenal performance and perhaps provide an inkling we are not simply weathering yet another short-lived mania.

For one, Chinese policymakers late last year began to ease back from their two-year crackdown on the shadow banking sector. China’s systemically important small and midsized businesses are responsible for the lion’s share of employment and rely on the shadow banking channel for credit. As such, this easing of financial conditions — also achieved by other measures such as cutting the amount of capital banks are required to hold — helped stabilize Chinese markets late last year, UBS Asset Management senior investment specialist for Asian equities Projit Chatterjee says.

Chinese policymakers have also moved more aggressively to stem the slowdown in the economy in other ways: by targeted spending on infrastructure, such as committing more money to build railways, by moving to reduce taxes and easing back on regulation across a range of sectors.

And insofar as fundamentals can help explain the price action, then optimism around the country's economy is playing a role. China devours half of the world's supply of copper, which makes the industrial metal a market proxy for the country's economy. It's therefore telling that the copper price is up 14% in a rally off lows that coincided with China's stocks.

Then there is investor sentiment, which is a fickle thing in China.

Retail investors are responsible for about three-quarters of the trading in A-shares, or Chinese companies trading on mainland exchanges, rather than in Hong Kong where institutional investors dominate.

Individual investors tend to fall prey to buying high and selling low, but Chinese retail shareholders have a reputation as more gamblers than true investors, and so exacerbate the wild swings in markets as they move in and out en masse. And judging by Monday’s price action, they are beginning to pile in.

The country’s policymakers’ pronouncements may be responsible for the budding euphoria among Chinese investors, but those same officials are well aware of the heightened dangers of bubbles and the busts that follow.

“The Chinese share market can move very quickly and very far in a short time,” JPMorgan’s Tai Hui says. After such a powerful upward move, Hui says he will begin tracking the pick-up in margin trading and the number of trading accounts being opened — two data points that blew out during the last bubble in Chinese stocks and can serve as “amber or red lights.”

All told, this week’s feeding frenzy in the Shanghai and Shenzhen is probably only the very first sign of euphoria. So far, the sharp recovery in Chinese stocks in 2019 looks a justified reaction to the pessimism and heavy falls of last year.