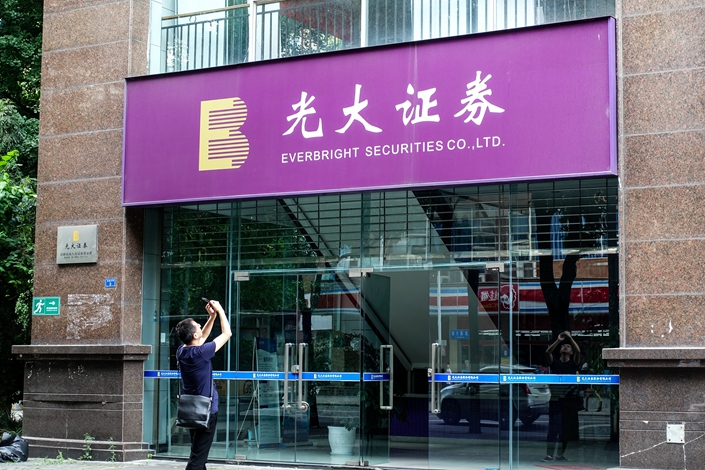 *News follows reports the head of Baofeng Group, another investor involved in the deal, has been detained by police on suspicion of bribery

(Beijing) — The chief risk officer of embattled Everbright Securities Co. Ltd. has handed in his resignation, Caixin has learned from multiple sources.

Wang Yong’s resignation follows a derailed British media deal that has cast a spotlight on lax risk controls at the large state-owned brokerage.

Wang is not the first senior executive from the Shanghai- and Hong Kong-listed brokerage who has decided to step down, likely due to risk control failures. In April, Xue Feng resigned his role as chairman, but the company required him to help handle the fallout from the blown deal.

The downfalls of the senior executives have their roots in the company’s participation — through subsidiary Everbright Capital Investment Co. Ltd. — in the purchase of a 65% stake in London-based sports rights distributor MP & Silva Holding SA for 5.2 billion yuan ($754 million) in 2016.

In October, MP & Silva was declared bankrupt by a British court and liquidated after it lost key contracts and encountered operational difficulties. The bankruptcy, along with suspicious dealmaking in the acquisition, led two investing partners to seek 3.5 billion yuan in compensation from Everbright Capital in February for failure to recoup their investments with promised returns.

Although Everbright Capital only entered the deal with a minority investment of 60 million yuan, it had to take more than 1.5 billion yuan in provisions for contingent liabilities and impairment losses for 2018, according to its annual report. As a result, the company’s net profit plummeted almost 97% to 103.3 million yuan last year.

Wang, 55, also a director of Everbright Capital, was brought into Everbright Securities in 2014 after spending 20 years at Royal Bank of Canada, where he held the positions of vice president and managing director of its quantitative risk analysis department.

Another potentially culpable former senior manager is Dai Weiguo, former president of Everbright Capital, who was also an important facilitator of the MP & Silva deal. While he was thought to have been dismissed from most of his duties in the first half of 2018, he was also kept on to deal with the deal’s fallout. He was removed from the list of the company’s directors in August 2018.

Much suspicion, however, has fallen on Xiang Tong, who at the time served as Everbright Capital’s investment director and the manager of the takeover project. He was arrested earlier this year on suspicion of accepting bribes.

Another investor involved in the deal was Baofeng Group Co. Ltd., a Shenzhen-listed online video services company. Caixin reported Thursday that Baofeng’s founder and President Feng Xin had been detained by police on suspicion of bribery. Separate sources told Caixin that the investigation may be related to the company’s ill-fated acquisition of MP & Silva.