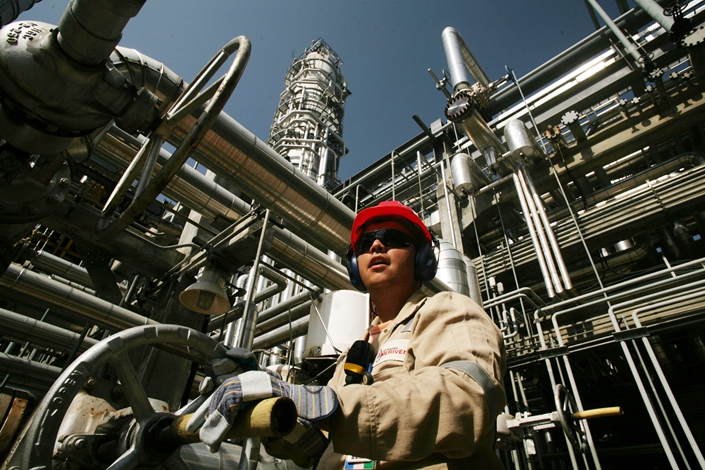 (Bloomberg) — A Chinese contractor has agreed to shore up Venezuela’s derelict refining network to ease fuel shortages, potentially complicating the Trump administration’s push for regime change in the oil-rich country.

Wison Engineering Services Co. Ltd., a Shanghai-based chemical engineering and construction company that is using China’s Belt and Road Initiative to expand overseas, agreed last month to repair Venezuela’s main refineries in exchange for oil products including diesel, according to people with knowledge of the deal.

U.S. financial sanctions aimed at starving the current regime of revenue contributed to the decision to revive a domestic refining industry crippled by years of mismanagement and under-investment, said one of the people, who asked not to be identified because the information is confidential.

The deal mirrors the OPEC producer’s other arrangements with Russian and Chinese oil majors, under which payments are made in crude by Venezuela’s cash-strapped national oil company.

Wison’s repairs are expected to last six months to a year, according to another person. The Nicolás Maduro administration was having difficulties navigating the U.S. economic blockade even before the U.S. announced additional restrictions on Aug. 5. Last month state-controlled Petroleos de Venezuela SA was importing Russian gasoline through Malta to relieve shortages, a slow and expensive route to the Caribbean nation.

Irregular fuel supplies have crippled mobility in a country where shortages of food and basic medical supplies have already caused a health crisis and led to one of the largest mass migrations of recent times. PDVSA, as the state producer is known, has been directing most available gasoline to Caracas, where Maduro is most vulnerable to mass protests.

The Trump administration was hoping to swiftly chase Maduro out of power earlier this year, and has criticized China and Russia for supporting what it considers a criminal and repressive regime.

The Chinese company hasn’t completed a contract it won in 2012 to overhaul the Puerto la Cruz refinery. Wison’s revenue from Venezuela sank 72% last year as the nation’s economic crisis deepened, according to its annual report.

China and Russia have an interest in preventing the complete collapse of Venezuela’s oil industry because it’s the only way to recoup the tens of billions of dollars in loans and investments they have made in the past decade. Wison’s deal also underscores how the oil-hungry Asian nation remains committed to Venezuela as a strategic location for foreign investment.

Restoring fuel production, if it happens fast enough, would weaken the U.S. economic blockade and put Maduro in a stronger negotiating position as talks with the opposition drag on without any visible progress.

Despite Venezuelans’ widespread dissatisfaction with their government, divisions within the opposition are complicating the push toward a post-Maduro administration. While about 50 nations recognize National Assembly President Juan Guaido as the country’s interim president, China has declined to get involved in what it considers an internal conflict.

Venezuela’s refining industry, once a major supplier to the U.S. with 1.3 million barrels a day of capacity, has been in gradual decline due to theft, inadequate maintenance and a brain drain of qualified staff, and was hit by a series of major power outages this year. In recent years, PDVSA hasn’t even been able to meet domestic gasoline demand that has historically been about 250,000 barrels a day.

The U.S. has so far shied away from military intervention in Venezuela and has instead imposed economic sanctions that target the oil industry and key members of the government and the military. American officials continue to project confidence about replacing Maduro with a pro-business administration despite the lack of progress.

China rejects “foreign interventions and unilateral sanctions” in Venezuela, and supports dialogue between the government and the opposition, its embassy in Caracas said in a statement on May 12. The embassy didn’t immediately offer additional comments when contacted by Bloomberg.

China wants “to be identified with a friendly socialist government, especially in the backyard of the U.S.,” said Schreiner Parker, Rystad Energy’s vice president for Latin America. “They have no guarantee that a regime change will necessarily mean that they’re going to be repaid.”