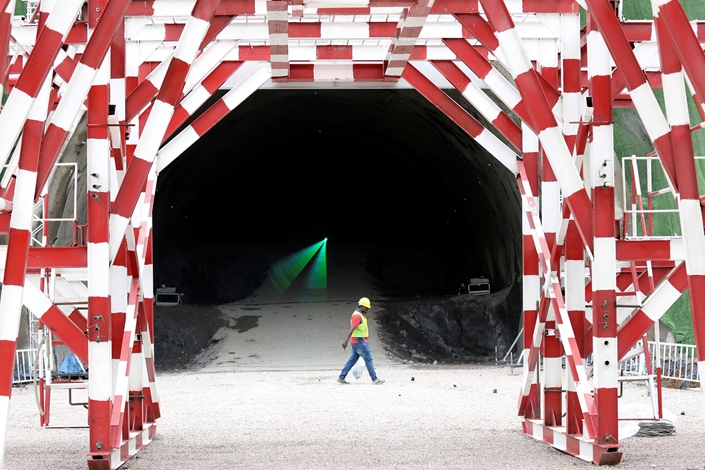 A worker walks past a tunnel that forms part of the East Coast Rail Link project in Dungun, Terengganu, Malaysia, on July 25. Photo: VCG

(The Straits Times) — The United States is set to supplant China as Malaysia's top source of investment, amid an increasingly bitter trade war between the two superpowers that has reconfigured global supply chains, especially in developing Southeast Asia.

Malaysia has lost out to its regional peers in capturing investment fleeing from tariff-hit China, but U.S. companies have dived deep here, more than tripling last year's manufacturing investments in the first quarter of this year alone.

Chinese firms may have been dissuaded by soured relations with Beijing after the Pakatan Harapan coalition led by Mahathir Mohamad won the May 2018 election and followed through with its pledge to review a raft of Chinese projects.

U.S. firms, however, see Malaysia as a “sweet spot” that addresses their concerns regarding cost, supportive infrastructure and market regulations, say analysts.

Barclays' regional economist Brian Tan told The Straits Times that “Vietnam is cheap but its manufacturing ecosystem isn't as developed. On the other end of the spectrum, labor costs are much higher in Singapore. This puts Malaysia in a nice middle ground.”

Data of approved foreign direct investment (FDI) shows Malaysia has lagged behind among ASEAN’s five developing economies (ASEAN-5) in luring Chinese firms, with Vietnam being the biggest winner so far. The other ASEAN-5 countries are Indonesia, Thailand and the Philippines.

Malaysia saw an 11.5 billion ringgit ($2.7 billion) inflow in manufacturing FDI from the U.S. in the first three months of this year, compared with just 3.2 billion ringgit for last year.

Inflows from China paled in comparison at only 4.4 billion ringgit, which was below the quarterly average last year.

China had been Malaysia's biggest FDI contributor over the past three years.

But the warm relations formed by the previous Najib Razak administration were shaken by a new government that cancelled pipeline projects worth 10 billion ringgit and seized back 1 billion ringgit already paid to the Chinese contractor.

It reinstated the Beijing-backed East Coast Rail Link only after slashing the price tag by a third to 44 billion ringgit.

Other China projects such as the massive Forest City property development in the Johor Strait are also under scrutiny.

Singapore Institute of International Affairs' senior fellow Oh Ei Sun said “There is apprehension in China as to Mahathir's flip-flopping attitude, but the main reason investors choose Vietnam is cost and work ethic.”

Deputy Minister of International Trade and Industry Ong Kian Ming said the U.S. influx has largely come from the electrical and electronics space, with Jabil Circuit and Micron — which together will bring in 1.5 billion ringgit — being the biggest names among 15 U.S. firms that had their investments approved in the first quarter of this year.

“The industry is facing a turning point in its development, and the U.S.-China trade war has created a unique window of opportunity which can catalyze the development of the entire industry in Malaysia for decades to come,” Ong said.

Micron back-end operations Senior Vice-President Gursharan Singh said the expansion in Malaysia was in line with the group's strategy to build a scalable, agile and well-positioned global capacity model.

The company chose to invest in Penang due to “numerous advantages, including a high-quality supply chain for the electronics industry; logistics, sustainable manufacturing infrastructure; conducive business environment; access to talent and strong government support,” Singh said when the plan was unveiled last November.

Beijing retaliated by allowing the yuan to fall, roiling markets and inviting accusations of currency manipulation from Washington.