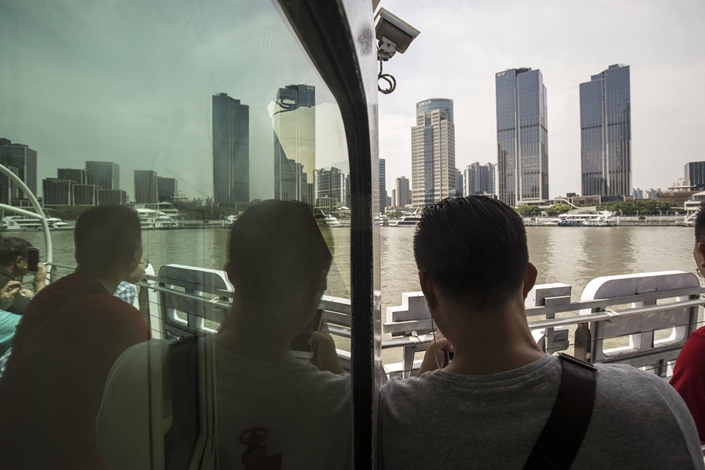 Passengers take a ferry across the Huangpu River in Shanghai in June 2018. Photo: Bloomberg

(Bloomberg) — Pressure on Chinese officials to boost stimulus has ratcheted up after credit growth tumbled to the second-lowest amount this year in July amid weak demand and seasonal factors.

Unlike global peers, China’s policymakers have shown little sign that they’re contemplating more aggressive monetary stimulus as they remain focused on keeping a lid on debt and financial stability risks. As the trade war with the U.S. dents confidence at home and abroad, economists say there’s now an increasing need to loosen policy.

“The key constraint has become credit demand,” said Larry Hu, head of China economics at Macquarie Securities Ltd. in Hong Kong. “In the coming months, credit growth would remain constrained by the lack of credit demand until stimulus has to go to Level-3, under which policy makers would artificially create credit demand through loosening shadow banking and property.”

China’s 10-year sovereign bond yield fell to 3% for the first time since 2016 on Tuesday. Escalations in global trade tensions since April have put a damper on sentiment in equities, helping spur a rally in Chinese sovereign bonds. The yield on the country’s 10-year debt is down about 40 basis points since a peak that month, and hasn’t traded below the 3% threshold since November 2016. A lack of demand for loans from companies is also prompting banks to park extra funds in the bond market, helping push down yields on the 10-year bond, said Hu.

The drop in credit was at least partly due to seasonal patterns with July’s credit growth usually slower than that in June. The only month this year with a lower total was February, when Lunar New Year falls.

New yuan loans to the real economy were 808.6 billion yuan in July, down by 477.5 billion yuan from a year earlier, according to the central bank.

“It reflects weak loan demand and tight credit conditions after the credit events in the regional banks,’’ said Michelle Lam, greater China economist at Societe Generale SA in Hong Kong. “With such a weak set of credit data there is now more pressure on policy makers to deliver more easing.’’

Lam said a step up in property tightening also likely weighed on lending.

Financial institutions offered 1.06 trillion yuan of new loans in the month, versus a projected 1.28 trillion yuan, while banks’ new yuan loans to nonfinancial enterprises was lowest since October. Broad M2 money supply grew 8.1% from a year earlier, slower than in June.

Macquarie’s Hu said policymakers are pressuring banks to lend, but the banks are finding it hard to do so due to a lack of credit demand and are also worried about bad loans. So banks are dishing out short-term lending to fulfill quotas while minimizing credit risks, but such lending “is neither significant nor sustainable,” Hu said.

Lending via shadow banking fell by 622.6 billion yuan in July on tighter property financing, the biggest contraction since June 2018.

“It’s worrying that the credit data, a key gauge of China’s monetary policy, is weakening at a time when the trade and tech frictions with the U.S. are escalating.’’ said Rob Subbaraman, head of global macro research at Nomura Holdings Inc. in Singapore.