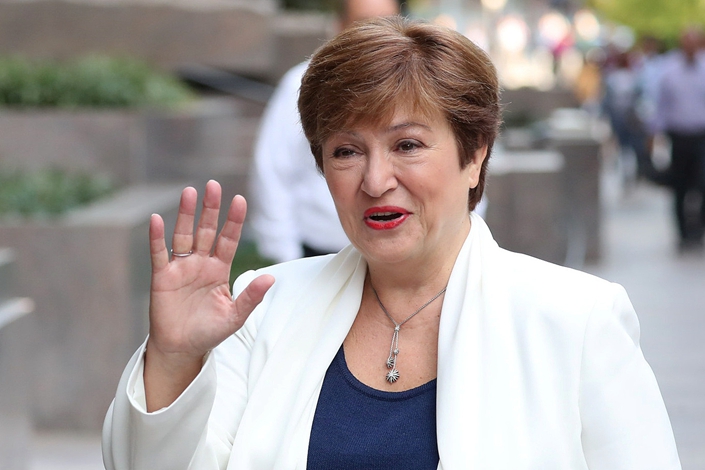 The International Monetary Fund and World Bank have issued fresh warnings about further cuts to their global growth forecasts amid economic uncertainties including Brexit, the U.S.-China trade war and a downturn in Europe, calling on governments to coordinate fiscal stimulus measures to prevent a severe slowdown.

The assessment came as China and the U.S. were set to resume high-level trade talks in Washington this week after a five-month hiatus, though the prospect of reaching a final deal in the near future to end the bitter trade war between the world's two largest economies remains low.

The new head of the IMF Kristalina Georgieva painted a downbeat picture of the world economy in her first major address in Washington on Tuesday, saying the fund will cut its growth forecast for both 2019 and 2020 in its next World Economic Outlook due Oct. 15. In July, the fund lowered its projection to 3.2% this year and 3.5% next year — its fourth downgrade since last October.

“The global economy is now in a synchronized slowdown,” she said, noting that the fund estimates that 90% of the world is seeing slower growth. By contrast, two years ago, growth was accelerating across three-quarters of the globe in a synchronized upswing, she added.

Georgieva's comment followed World Bank President David Malpass's similar warning on Monday in Montreal. Malpass said in a speech that the global economic outlook is deteriorating amid Brexit-related uncertainty, trade tensions and a downturn in Europe.

“Global growth is slowing,” Malpass said. The world economy now looks even weaker than the bank’s June forecast for 2.6% growth in 2019, as it is “hurt by Brexit, Europe’s recession and trade uncertainty.”

The trade tensions have contributed to slowing manufacturing and weakened investment, creating a “serious risk” of spillover to other areas of the economy like services and consumption, Georgieva continued in prepared remarks.

“Everyone loses in a trade war,” she said. “For the global economy, the cumulative effect of trade conflicts could mean a loss of around $700 billion by 2020, or about 0.8 percent of GDP. As a reference, this is approximately the size of Switzerland’s entire economy.”

“Uncertainty — driven by trade but also by Brexit, and geopolitical tensions — is holding back economic potential,” Georgieva said. Not only that, but the economic rifts could “last a generation” with possible shifts such as broken supply chains and siloed trade.

A deeper slowdown would require more fiscal support, Georgieva said. “If the global economy slows more sharply than expected, a coordinated fiscal response may be needed,” she said. “We are not there” but it’s better to be too early than too late, she said.

On monetary policy, Georgieva said central banks should keep interest rates low where appropriate, “especially since inflation is still subdued in many countries and overall growth is weakening.” She warned, however, that very low or even negative interest rates can come with “negative side effects and unintended consequences” that can lead to financial vulnerabilities.

“Monetary and financial policies cannot do the job alone. Fiscal policy must play a central role,” she said.

Georgieva, former CEO of the World Bank, took over on Oct. 1 as IMF managing director, succeeding Christine Lagarde, who left to lead the European Central Bank.