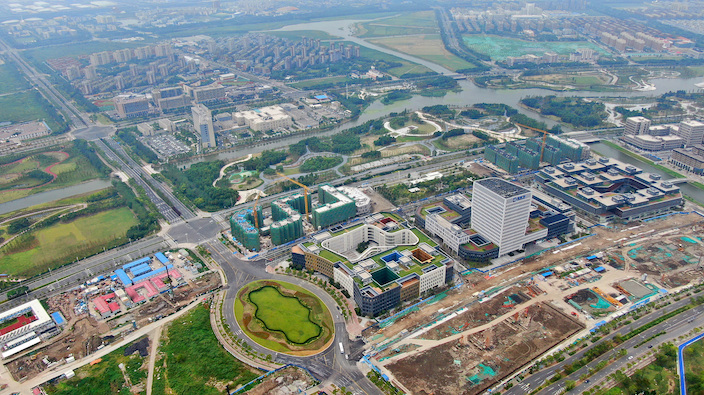 Two of China’s biggest state-owned banks announced plans to provide a total of 3 trillion yuan ($420 billion) of credit in the Yangtze River Delta region in the next five years.

The move is part of a grand plan initiated last year to integrate the financial hub of Shanghai with manufacturing regions of Zhejiang, Jiangsu and Anhui provinces, an area with a combined GDP of 21.2 trillion yuan ($3 trillion) in 2018, or nearly a quarter of the country’s economy.

In November 2018, President Xi Jinping announced the integration plan as “a national strategy” at the opening of the first China International Import Expo in Shanghai.

Bank of China will provide 1 trillion yuan of new credit in the next five years to support connectivity, digital innovation, health and green development in the region, Vice President Lin Jingzhen said Thursday at a routine press conference hosted by the China Banking and Insurance Regulation Commission.

On the same day, Industrial and Commercial Bank of China (ICBC) released an action plan to provide 2 trillion yuan of financing in the region. The bank will set up a branch in the Shanghai Free Trade Zone, providing financial innovation, cross-border business and financial market trading business.

Both banks also pledged support for the opening-up of China’s commodities markets, including trading of energy, mining and agricultural products at exchanges including the Shanghai Futures Exchange, Shanghai Gold Exchange and Shanghai Clearing House.

Bank of China has entered into strategic cooperation with all of the exchanges, said Liu Yunfei, deputy general manager of the bank’s Global Trade Services Department.

Bank of China was involved with the preparation and launch of China’s first yuan-denominated crude oil futures contracts on the Shanghai International Energy Exchange in March 2018. Bank of China and ICBC are among eight banks that handle margin deposits for the crude futures.