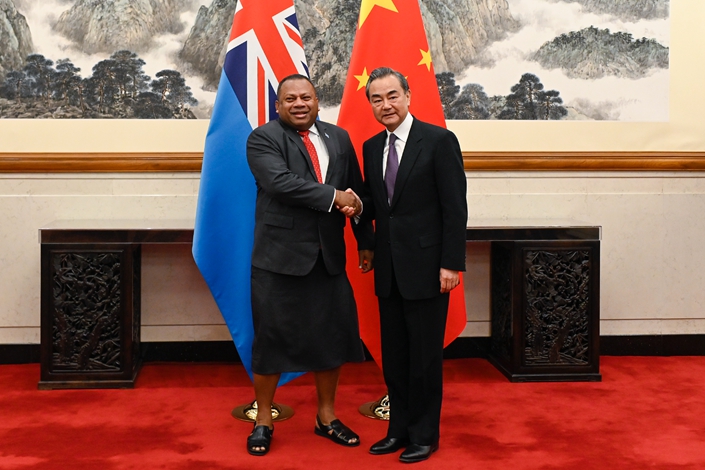 (Bloomberg) — China should put the brakes on its lending in the South Pacific to avoid lumping economically vulnerable nations with unsustainable debt, according to a report released by an Australian think tank.

“The sheer scale of China’s lending and its lack of strong institutional mechanisms to protect the debt sustainability of borrowing countries poses clear risks,” the Lowy Institute said in a report released Monday. “China cannot remain a major lender in the Pacific at the same scale as in the past without fueling significant” dangers, it said.

According to Lowy, six South Pacific governments are debtors to China: Cook Islands, Fiji, Papua New Guinea, Samoa, Tonga, and Vanuatu. Between 2011 and 2018, China made official loan commitments to the region totaling about $6 billion, or about 21% of regional GDP.

As China spreads its influence beyond the South China Sea to the South Pacific — a region comprised of island nations traditionally under U.S. hegemony and on Australia’s doorstep — officials in Washington and Canberra are increasingly concerned Beijing may use debt through infrastructure loans as leverage to establish military bases in the region.

Last November, U.S. Vice President Mike Pence criticized President Xi Jinping’s Belt-and-Road Initiative, which Morgan Stanley has said may total $1.3 trillion by 2027 — dwarfing the funds the U.S. and allies have mobilized. Pence said the U.S. doesn’t “drown our partners in a sea of debt” or “offer a constricting belt or a one-way road.”

While the Lowy report said there was no evidence to suggest China was engaging in deliberate “debt-trap diplomacy” in the South Pacific, it urged Beijing to adjust “the scale, nature, and opacity of China’s lending activities” in the region.

“If China wants to remain a major development financier in the Pacific without fulfilling the debt-trap accusations of its critics, it will need to substantially restructure its approach, including adopting formal lending rules similar to those of the multilateral development banks,” it said.

China has increased its economic and diplomatic footprint in the region by funding and building much-desired transport and utility infrastructure, compared with the traditional focus by U.S. and Australia on bolstering governance, health and education services.

According to Lowy, between 2011 and 2017 China was responsible for 37% of all official sector loans to the region, with traditional creditors including Asian Development Bank and World Bank responsible for the bulk of the balance. China is the single largest creditor in Samoa and Vanuatu, and accounts for more than half of Tonga’s total outstanding debt, it said.

In response to China’s rising power in the region, the U.S. recently established a Directorate of Pacific Affairs within the White House National Security Council, which provides a hub for coordinating U.S. policy in the region with other like-minded countries, including Australia.

Australia unveiled A$2 billion ($1.4 billion) infrastructure fund for the region last year, while the U.S. joined a group that includes Japan, the European Union and the ADB to fund projects.

“There is scope for Australia’s more modest infrastructure lending plans to be sustainable,” the Lowy report said. “If Australia wants to do more in the Pacific though, it should reverse the current stagnation in its overall aid budget.”