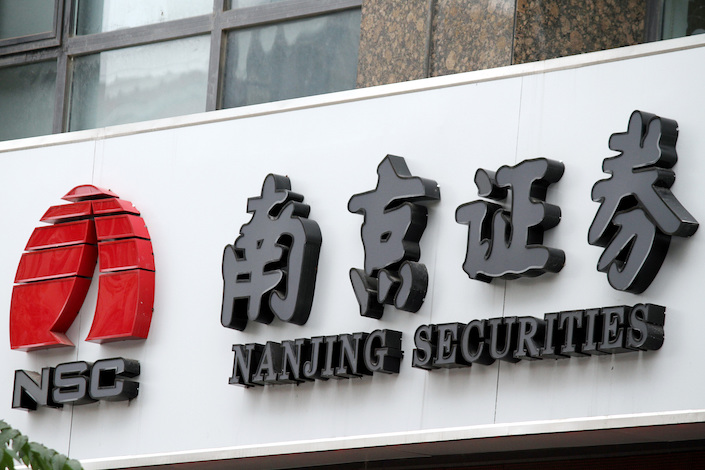 The action is a continuation of stepped-up field checks and fines imposed on brokerages engaged in the stock-pledging business after a crisis in the sector rocked China’s stock market last year. Nanjing Securities is the eighth institution penalized in the crackdown.

Borrowing money from brokerages against pledged shares is a common way for Chinese publicly listed companies to obtain funding, especially small private ones that usually have limited access to credit. A pledged repurchase agreement is a derivative fundraising tool used by stockholders in publicly listed companies to raise funds for quick transactions. Shareholders agree to buy the derivative back at a prearranged date.

The high ratio of pledged shares at many companies and increased market volatility last year fueled panic sell-offs, making China’s stock market the worst-performing major market in the world last year with major indexes in Shanghai and Shenzhen losing a quarter of their value.

In addition to injecting hundreds of billions yuan in bailout funds to shore up the stock market, the China Securities Regulatory Commission (CSRC) conducted field checks on brokerages that have large stock-pledging businesses.

The Nanjing Securities suspension resulted from a regulatory warning issued in September by the Jiangsu Securities Regulatory Bureau, which found that the brokerage conducted insufficient due diligence and poor management of funds in its stock-pledged repo transactions.

In August, the brokerage disclosed a plan to invest 2.5 billion yuan ($354 million) in expanding its credit transaction business, which includes stock-pledged repo transactions.

Among them, Yingda’s and China Post Securities’ new stock-pledged repo transactions were suspended for six months.

The regulator said in the August statement that it would continue to strengthen regulation and field checks of brokerages’ stock-pledging business and punish any violations.