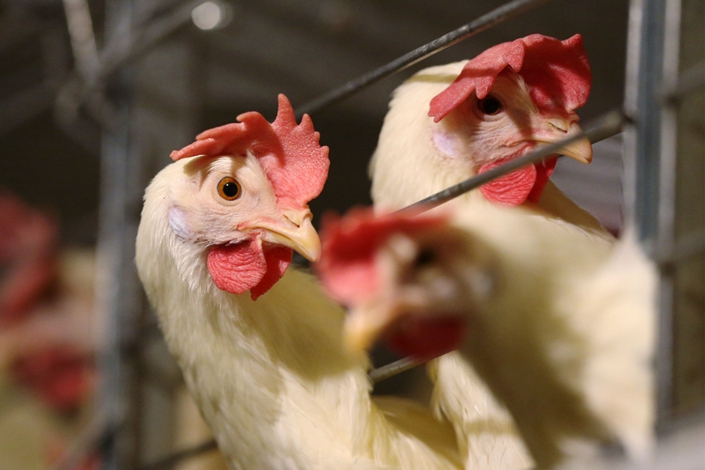 Laying hens live in enriched housing on a farm near the community of Springstein, located just west of Winnipeg, Manitoba, Canada, on Dec. 5, 2018. Photo: Bloomberg

The company earlier this month sent its first container of chicken feet to China since the 2015 ban and is loading another 12 boxes this week, said CEO Joe Sanderson. That’s even as the Asian nation still has duties in place on American supplies. The third-largest U.S. chicken producer expects the 35% tariffs will be removed next year, helping accelerate exports.

China lifted its ban on U.S. poultry last month and later approved imports from 172 American plants. The Asian nation imposed the embargo in 2015 following an outbreak of highly pathogenic avian influenza, and kept the restriction even after nearly all other nationwide bans had been removed.

“We actually started packing paws on Nov. 25 and our Moltrie plant loaded the first container on Dec. 5 to export to China,” Sanderson said in a telephone interview, referring to a facility in Georgia. “It’s a full container, and actually this week we will load 12 more containers out of various plants.”

Sanderson said it expected Chinese tariffs to be lifted within 60 to 90 days after the signing of Phase-One deal in January. That will help the company boost sales.

“They are making money on it, I would suspect,” said Mike Cockrell, Sanderson’s chief financial officer.

U.S. poultry exports to China are projected to top $1 billion a year, according to U.S. Trade Representative Robert Lighthizer. At their peak, poultry shipments to the Asian nation were $722 million for chicken and $71 million for turkey, data compiled by industry associations show.

Sanderson is selling the chicken paws to private buyers in China and is already in talks for deals on other cuts, the CEO said. The company received inquiries for parts including whole legs, leg quarters and wings, he said in the interview.

At full capacity, Sanderson will produce about 87 million pounds of chicken feet a year, with exports to China benefiting the company’s operating income by $71 million a year at current prices. That could be even higher if tariffs are lifted.

“We are very encouraged that we are once again eligible to ship product to China and expect the material benefit from the open market,” Sanderson said in a call with analysts.

Boosting paw exports and selling other cuts will depend on Chinese approval of cold-storage facilities, a move Sanderson expects to take place on Dec. 25. While the company has so far avoided the use of cold storage, that option will be needed in order to ship bigger quantities.

“We don’t have the capacity to blast and hold paws and all the dark meat: leg quarters, whole legs, whatever it is,” Sanderson said, commenting on capacity at the company’s plants. “We will need the cold-storage facilities to help us blast freeze and accumulate product for containers for paws and whole muscle products.”

China is facing a protein shortage due to the spread of African swine fever, which has already slashed the hog herd by 40% in the world’s top pork consumer.

“The fact that the world is facing an unprecedented protein deficit over the short term is real,” he said.