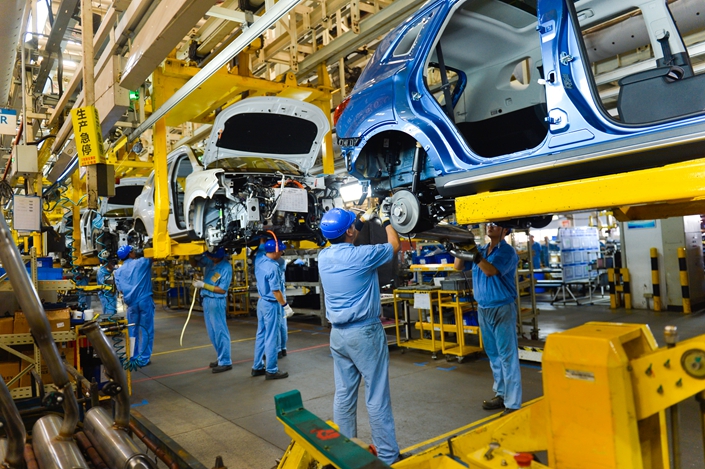 The alliance between Shanghai-based SAIC Motor Corp. Ltd. and Guangzhou Automobile Group Co. Ltd. (GAC) represents a major partnership between companies that collectively control one-third of China’s auto market — the world’s largest. The former controls about a quarter of the market and is the main China joint venture partner for Volkswagen AG and General Motors; the latter controls 8%, much of that through its joint ventures with partners that include Toyota and Honda.

The broad-ranging strategic tie-up signed between the pair on Monday could see them collaborate in a number of areas. Many are related to emerging technologies like new-energy and self-driving vehicles and development of new business models such as those behind shared cars. The pair said they could also work together on developing international markets.

The two companies, one based in China’s commercial hub of Shanghai and the other in the southern manufacturing powerhouse known as the Greater Bay Area, are two of the more commercially-oriented players in China’s largely state-owned auto sector, a senior car analyst told Caixin. Accordingly, they are more pragmatic and thus more likely to seek such alliances, the analyst said.

SAIC and GAC emphasized that the deal signed on Monday is just a framework agreement, and that specific collaborations would be worked out on an individual basis. The agreement has a five-year time frame, according to a research note from Hua Chuang Securities.

Despite being the world’s largest auto market, having passed the U.S. nearly a decade ago, China’s domestic auto industry is still highly fragmented with more than a dozen major players. Development of the new technologies needed for cars of the future, such as autonomous driving and new energy technologies, can be extremely costly for such smaller players, not to mention risky if such efforts prove unsuccessful.

Some names have also tied up with foreign partners. In November, Toyota Motor Corp. and BYD Co. Ltd. announced their formation of a joint venture to design and develop new-energy cars using BYD’s electric vehicle platform technology and parts. That venture also plans to integrate Toyota’s quality and safety control standards, and vehicles it develops will be sold under the Toyota brand.

On the global stage, Western giants Ford and Volkswagen announced a similar global alliance nearly a year ago. Following that, Ford announced in September that it would start to use Volkswagen’s electric vehicle architecture and Modular Electric Toolkit to manufacture new-energy vehicles.

The tie-ups also come as China’s automakers face headwinds from weakness in their own market. Sales in the first 11 months of this year fell 13.3% industry wide, and the market is now on track to post an unprecedented second consecutive year of contraction.