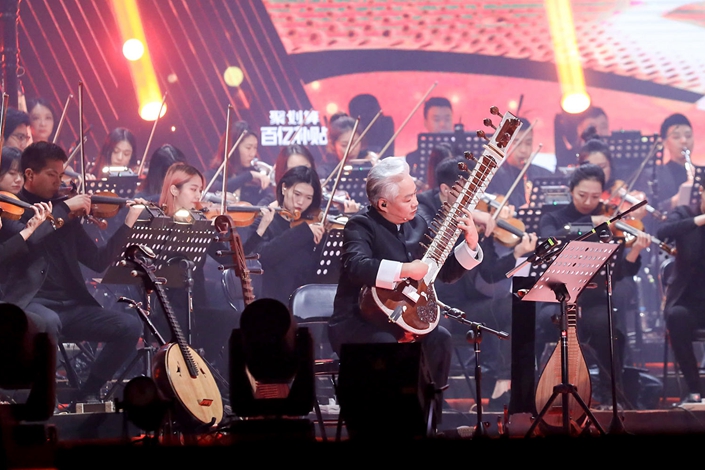 The reason was the 57-year-old’s appearance on video-sharing platform Bilibili’s “Last Night of 2019” — a variety show that became China’s most talked-about TV event of New Year’s Eve, amassing over 46 million views within three days.

The standout performance of the night was an 11-minute segment titled “Rhythm World,” featuring Fang performing alongside a 100-strong orchestra. In a virtuosic display, the musician played an array of traditional instruments from China, India, Italy, and Japan, and even performed a solo using his own face.

“Rhythm World” didn’t just stick to classical pieces; it also incorporated elements from Chinese “wuxia” martial arts culture, American folk music, and Japanese anime. The performance ended with a rendition of the theme from classic movie “The Godfather” by the orchestra, accompanied by Fang on the high-pitched “pipa.”

In the days following the show, many commentators painted Fang as a viral star enjoying his 15 minutes of online fame. But he has been a fixture of China’s folk music scene since as far back as 1987, when he won the gold prize at the first China Art Festival at just 25 years old. He is widely regarded as the world’s leading five-stringed pipa player.

Sixth Tone spoke to Fang about the success of “Rhythm World” and the future of Chinese folk music. The interview has been edited for brevity and clarity.

Sixth Tone: How long did it take you to plan and prepare “Rhythm World”?

Fang Jinlong: Not too long. I received a phone call from the gala organizers in October last year, and then I sat down with the director, Gong Peng, and orchestra conductor, Zhao Zhao, in mid-November. First, we decided which songs to play and then chose the instruments. I guess we talked for a little over an hour.

Why such a short period of time?

Because I’ve got a lot of confidence in this area. I’ve been doing this for 42 years now, so deciding which instruments work well with which music comes naturally to me. It’s just like an experienced chef sensing how different ingredients will change the flavor of a dish.

Some described the show as one Chinese folk musician versus 100 performers on Western instruments. Did you feel outnumbered?

Of course not. In fact, quite the opposite. Western orchestras perfectly set off the characteristics of folk instruments.

Chinese folk musical instruments — and indeed all Asian instruments — are extremely unique. They’re better suited for solos, rather than being part of an ensemble. A single pipa can represent a powerful army, but 10 of them played together sounds like a toilet being scrubbed. Western orchestras, by contrast, sound great playing together, but sometimes Western instruments on their own are nothing special.

Many people said they also enjoyed the show because they simply thought it was fun.

That’s exactly what I was hoping to achieve! The way I see it, the best way to help folk music reach a wider audience is by making it fun.

Frankly, folk music today is a niche interest in China. I’d say 90% of the posters I see at concert halls across China are for Western music, and less than 10% are for Eastern folk music. As a folk musician and an extremely sensitive person, this really gets to me.

People in the folk music world are constantly trying to come up with new ways to promote the genre. My idea was to use music to make people smile. I swallowed my pride and produced a selection of fun songs. For example, I used a pipa to reproduce the sound of a dozen different instruments in a performance, which attracted more than 1 million views on Bilibili.

When “Rhythm World” went viral, a friend asked me whether I’d expected it. Of course I hadn’t. But I was always confident the program would be interesting and fun.

Now that “Rhythm World” — and you — have become well-known, do you worry other folk musicians will copy your act?

Not at all. This kind of performance looks simple, but it takes a lot of skill and practice.

Some people enjoyed my performance of “Oh! Susanna,” which I played on my cheeks. But when others tried to imitate it, they found they couldn’t. Why is that? It’s because I play the pipa and was using the lunzhi strumming technique to make the sounds.

You are known for playing over 100 different instruments. How did you learn so many?

My father worked in traditional Chinese opera, so there were always lots of folk instruments around the house from when I was a young child. By the time I reached elementary school, I could already play a dozen or so.

Learning a musical instrument is a lot like learning a foreign language. Picking up the first language can be quite difficult, but as you learn more it gets easier. If I want to learn a new instrument now, I’ll pick it up, play around a little, and watch someone who’s good at playing it. That’s basically enough.

Is that because folk instruments are easier to learn?

Take the “shakuhachi,” for example. You have to produce 12 notes from this bamboo flute with just five holes. Then there’s the musical saw, which was invented by a lumberjack in Italy and has no strings, no keys, and no continuous pitch. You can imagine how difficult it is to play.

In fact, my biggest problem at the moment is finding time to practice. How can I, when I need to practice over 100 instruments? That’s why I have a shakuhachi in my hands now. I have to take any opportunity to practice.

After learning to play so many folk instruments, do you ever feel like they’re all more or less the same, with only slight differences?

Not in the slightest. Although Western classical music has a respected status, the instruments became fixed a long time ago. Folk music is different. Different ethnic groups have different instruments, and only those specific instruments can express that group’s identity.

But from another perspective, I do understand what you mean. The more you know about different countries’ music, the more you feel humanity is a harmonious yet diverse community. The Arabian “oud” evolved into the pipa when it arrived in China, the lute in Europe, and the guitar in Spain. Then there’s the “huang” — a reed instrument from ancient China which is the ancestor of the Western harmonica, accordion, and pipe organ. I’m me and you’re you, but at the same time, there’s part of me in you and you in me.

Is that why you played instruments from different countries in “Rhythm World”?

Exactly. I didn’t just stick to Chinese folk instruments. In the future, I plan to research folk music from around the world. 2020 has just begun, and the world isn’t very stable. As a Chinese musician, I hope to use folk music as a call for peace.