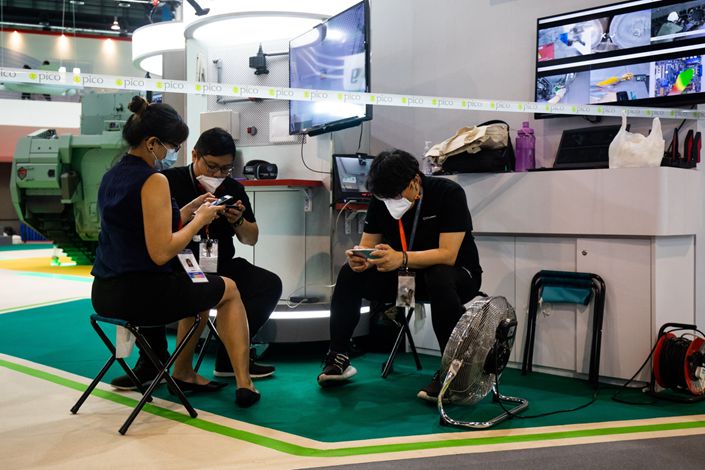 Employees wearing protective masks use smartphones during a media preview day at the Singapore Airshow held at the Changi Exhibition Centre in Singapore, on, Feb. 9. Photo: Bloomberg

(Bloomberg) — The timing couldn’t be much worse for Asia’s biggest airshow as the novel coronavirus roils the aviation industry.

The outbreak has prompted scores of companies and VIPs to pull out of the Singapore Airshow, including F-35 fighter-jet maker Lockheed Martin Corp. and Commercial Aircraft Corp. of China. Industry leaders Boeing Co. and Airbus SE, which usually count on such trade shows to secure or pave the way for multibillion-dollar plane orders, are sending smaller delegations than initially planned. A side summit for executives scheduled for Monday was canceled.

The venue is also amplifying concerns after several coronavirus cases in Europe were traced to a January business meeting at the Grand Hyatt in Singapore, whose 45 coronavirus cases make the tiny city state one of the most infected places outside of the Chinese mainland. In total, the epidemic has sickened more than 42,000 people and killed at least 1,000 as of Tuesday.

Despite the Singapore government cautioning against non-essential large-scale gatherings, the show is going ahead. But organizers are taking extra precautions such as recommending people to avoid shaking hands and cutting back the number of tickets being sold to the public. On Sunday, cars arriving at the venue were inspected and occupants had their temperatures checked. Additional health screenings and cleaning measures are also being planned.

“The organizers are taking a calculated risk by not scrapping the event as any infection that might occur during the period would have far-reaching consequences,” said Shukor Yusof, founder of aviation consultant Endau Analytics in Malaysia. “Our guess is Airbus and Boeing would probably rather not be in the spotlight at all, as they struggle to overcome the corruption and Max crises, respectively. The year has started on a very negative note.”

The virus is weighing on the airline industry as carriers cancel flights to China, with 28% of scheduled services in and out of the country suspended in the Jan. 23 to Feb. 4 period, according to air-travel researcher Cirium. Some countries have expanded scrutiny of passengers to those flying in from Singapore and Thailand, which has 32 confirmed cases.

The year was off to an inauspicious start even before the outbreak. Boeing halted production of the 737 Max — its best selling narrowbody — and it is still unknown when the grounded plane will fly again following two fatal crashes. Meanwhile, Airbus admitted to illegally trying to sway decision makers in aircraft sales and agreed to a record $4 billion bribery settlement.

The biennial airshow is billed as one of Singapore’s biggest events, drawing more than 54,000 trade attendees in 2018. The event that year generated over S$343 million ($247 million) in spending on things such as accommodation and food, according to organizer Experia Events.

“I’m not sure you’re going to see too many announcements at this show. People want to be respectful of the terrible situation of our friends, particularly in Wuhan,” John Slattery, head of commercial aircraft at Embraer SA, said in an interview Monday. “It will be a very low-key show as a result of that.”

The official website for the airshow has an advisory telling people to stay away if they are unwell with a fever or have respiratory symptoms such as a cough or runny nose. Visitors who traveled to Hubei province, the epicenter of the outbreak, in the past 14 days aren’t allowed into the show. Medical staff will be on standby and chairs will be tagged at seated events to help contact tracing, according to the advisory.

Lockheed Martin and Raytheon Co. pulled out after Singapore raised its disease response level to orange on Feb. 7, the same alert used during the SARS outbreak in 2003. Companies including Gulfstream Aerospace Corp., Textron Aviation Inc. and Bombardier Inc. have also withdrawn.

Boeing will still be hoping to announce “something positive,” like selling its brand new widebody 777X jets or 787 Dreamliners, said James Teo, an analyst with Bloomberg Intelligence in Singapore, while Airbus will look to get more orders for its A320neo family of jets, as airlines move away from Boeing’s 737 Max model. That would help the European planemaker “divert attention away from their recent bribery settlement,” Teo said.

Narrowbody, single-aisle jets like the Airbus A320 and Boeing 737 form the mainstay of global aviation, flying passengers on shorter domestic routes and connecting nations with slightly longer international flights. After years of stellar orders, concerns have mounted over whether fast-growing regions like Asia can absorb all the planes. Jet Airways India Ltd., once India’s top airline, stopped flying last year, wiping $25 billion off Boeing’s order-book, while Vietnamese conglomerate Vingroup JSC abandoned a plan to start an airline due to the risk of oversupply.

“The mood at the show will be quite wary,” said Richard Aboulafia, an aerospace analyst with Fairfax, Virginia-based Teal Group, noting the overcapacity problem twin-aisle jets face.