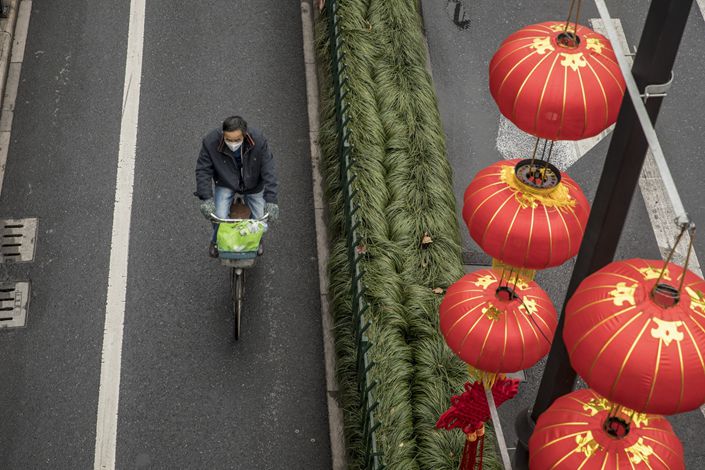 (Bloomberg) — Some of the world’s major bond funds are rekindling their love for Chinese government debt, as an unexpected rally in recent weeks took the 10-year yield to the lowest level since late 2016.

The asset management arms of The Pictet Group, UBS Group AG and BNP Paribas SA added China’s government and policy bank bonds on bets that the fatal outbreak of the coronavirus will take a toll on the country’s already-slowing economy. Its sovereign notes rallied the most in five years last week, as the impact of the disease raised hopes for more aggressive central bank easing.

China’s economy is under renewed pressure from shutdowns and disruption brought by the outbreak, which has claimed more than 1,100 lives. Last week, the People’s Bank of China injected liquidity into the financial system and reduced interest rates on short-term funds, a move that effectively made it cheaper for traders to build leverage and buy bonds. The central bank’s deputy governor also signaled further cuts to the cost of its medium-term loans to lenders.

“It’s clear that the bond market expects further easing,” said Arjun Vij, a portfolio manager at JPMorgan Asset Management. He is long government and policy bank bonds, and expects yields to drop 10 to 15 basis points from current levels. “Virus-related developments have precipitated a negative growth shock during what would otherwise be a consumption-heavy period.”

A revival in foreigners’ demand for Chinese debt is good news for Beijing, which witnessed sub-0.5% growth in overseas funds’ holdings of onshore bonds the past two months despite its efforts to open up domestic markets. Global index compilers’ inclusions of Chinese notes into their gauges, and a steadier yuan — thanks to the China-U.S. trade war truce — are also boosting investor confidence in the securities.

The yield on China’s 10-year sovereign notes plunged to 2.79% this week, before paring the decline to stand at 2.83% on Wednesday. The rally comes after the virus shut down the majority of China’s economy even after a prolonged Lunar New Year holiday. That has prompted investment banks to cut their forecasts on the nation’s growth.

In addition to the PBOC’s interest-rate cuts, China is also seeking to buoy growth by boosting fiscal spending in the near term. On Tuesday, the Ministry of Finance allowed regional authorities to issue an extra $122 billion of debt, before the government budget is scheduled to be approved in March.

“We envisage China will come back and throw the kitchen sink at this,” said Hayden Briscoe, head of fixed income for Asia Pacific at UBS Asset Management, referring to Beijing’s virus response. He is buying government and policy bank notes and contends the 10-year sovereign yield “could go a lot lower from here, and 2.5% isn’t inconceivable.”

But not everyone expects to see a drastic rally. BNP Paribas Management fund manager Jean-Charles Sambor, who accurately predicted a rebound in Chinese bonds late last year, said the 10-year yield could climb to 3.2% next month as uncertainty of the virus outbreak subsides.

JPMorgan’s Vij says he’s shedding some of his positions in 10-year notes for three- and five-year ones following the recent rally. A global bond fund he co-manages at the firm jumped 9% over the past year, beating 91% of its peers, according to data compiled by Bloomberg.

While future gains could be limited by stronger sales of muni bonds in China and a low chance of overly intense easing, “onshore China government and policy bank bonds still strike a chord with foreign investors,” said Cary Yeung, head of Greater China debt at Pictet Asset Management (HK) Ltd. He’s been adding such notes since January. “Amid the coronavirus-prompted market turmoil, we expect onshore yuan bonds to remain resilient.”