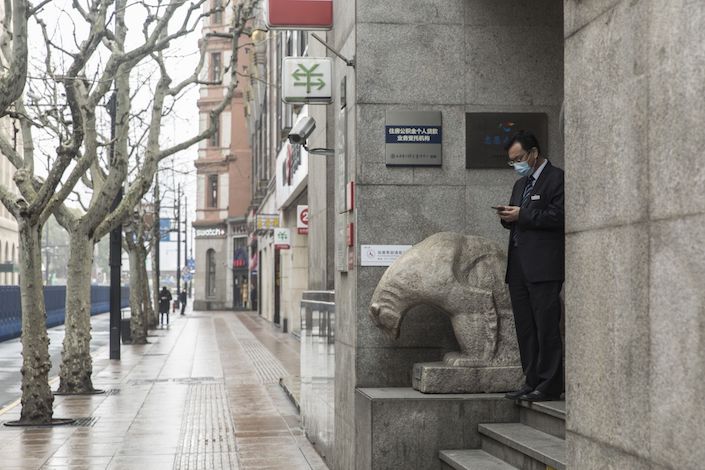 An employee stands outside of a bank in Shanghai. Photo: Bloomberg

China’s top securities regulator said it would maintain a normal pace in reviewing proposed listings so that new share sales won’t be hurt by the coronavirus epidemic.

The China Securities Regulatory Commission (CSRC) will meet to review initial public offerings (IPOs) at an appropriate time based on the virus situation and will maintain consistency in such reviews, sources close to the regulatory body told Caixin.

The securities regulator reaffirmed its support for companies’ need for funding to cope with the slowing economy and damage from the epidemic. Yan Qingmin, deputy chairman of the CSRC, said Saturday at a press briefing that the commission would ensure normal reviews of IPOs and merger and acquisition deals. The commission also established a special channel for virus-stricken companies to raise funds through bond and securities sales, Yan said.

The commission has yet to hold a meeting of its IPO review committee since the Chinese New Year holiday in late January as the fast-spreading Covid-19 outbreak has disrupted businesses across the country.

As of Sunday, the epidemic has killed 1,772 people and sickened more than 70,000 in China. Authorities have imposed restrictions on transportation and encouraged the public to stay home. A large number of business entities have extended holidays and haven’t resumed normal operations.

The CRSC has maintained regular reviews of IPO applications and has approved two applications each week over the past two weeks, according to the commission. As of Feb. 14, 52 companies were waiting for the commission’s final clearance for their listings, publicly available information showed.

Twelve companies have priced their offerings in Shanghai or Shenzhen this month with a combined value of $2.8 billion, according to Bloomberg data. But those listings were all cleared before the New Year holiday.

The total value of merger and acquisition deals involving Chinese companies dropped to $25.9 billion so far this year, the lowest for the period since 2014, according to Bloomberg.

The CSRC said earlier that it would maintain its normal working pace and listing review through online office work and will enhance communication with companies and financial intermediaries via telephone and email during the disease-control period. It encouraged companies to submit materials online. The regulator also said it would extend deadlines for companies to send feedback, replies and related documents during the period.

As of Friday, four companies registered in Hubei province, the epicenter of the outbreak, issued bonds through the channel to raise 2.8 billion yuan ($400.9 million), according to Yan.

On Feb. 14, the CRSC revised refinancing rules (link in Chinese) to loosen fundraising by listed companies, a move that sparked expectations of a refinancing boom. In a research note, Tianfeng Securities Co. projected that China’s refinancing market will total 1.2 trillion yuan to 1.4 trillion yuan this year with a rebound in mergers and acquisitions.