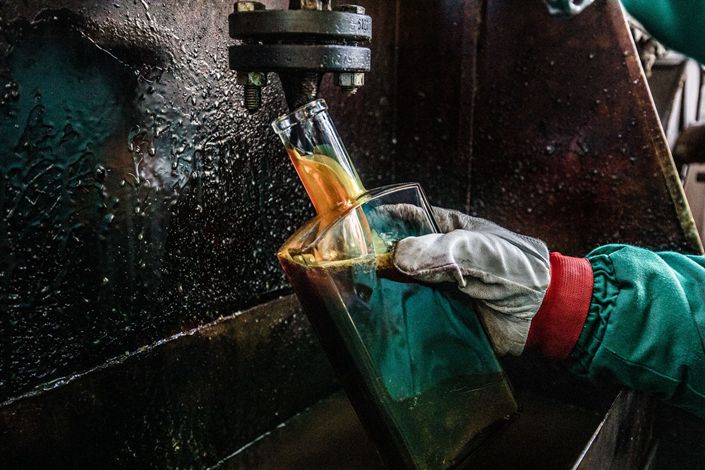 An employee takes samples in the Duna oil refinery in Szazhalombatta, Hungary, on Feb. 13. Photo: Bloomberg

(Bloomberg) — Chinese refineries are throttling back production even further to cope with weak demand and a lack of workers due to the coronavirus, and are now processing 25% less oil than they were last year.

The deepening run cuts belie optimism that the impact of the epidemic may have peaked, a sentiment that’s helped spur a recovery in oil prices over the last week and a half. Many people are still trapped in their homes and unable to go to work, while curbs on travel have pummeled demand for transport fuels.

The low run rates will probably last at least through the end of February, depending on whether the virus is brought under the control, said the people, who asked to not be identified as they aren’t authorized to speak to the media. Swelling inventories remain the biggest challenge for most of the refiners, especially those in the eastern province of Shandong and the Yangtze river basin, they said.

“Chinese processors may face the toughest time in the next two weeks,” said Li Li, an analyst at commodities researcher ICIS-China. With high inventories and slow sales of fuels, “any additional production could be painful,” she said.

Gasoline stockpiles held by independent refiners in Shandong were at about 35% of total production capacity at the start of February, compared with 15% on Jan. 23, according to industry consultant SCI99. China’s commercial oil inventories at ports have also climbed as the virus weakened demand.

Global oil demand will drop this quarter for the first time in over a decade as the coronavirus batters China’s economy, the International Energy Agency said last week. However, benchmark Brent crude has rallied 11% since closing at a 13-month low last Monday on supply risks and optimism a recovery in Chinese consumption wasn’t too far away. It jumped 2.4% to $59.12 a barrel on Wednesday.

Chinese refineries processed an average of 13.4 million barrels a day of crude in the second half of last year, according to data compiled by Bloomberg.

Asia’s biggest economy has been running at just 40% to 50% capacity in the last week, according to Bloomberg Economics, and how quickly it can get back to normal is the big question for investors. Oil demand has traditionally been tightly correlated with global economic growth, making the refinery run rates a useful indicator for how quickly China is recovering.

The run rates may start rising in March and return to 2019 levels from as early as April, according to ICIS’s Li. Physical fuel trading has started recovering in some regions as factories gradually resume operations, said Maggie Han, an oil analyst at consulting firm JLC in Beijing.