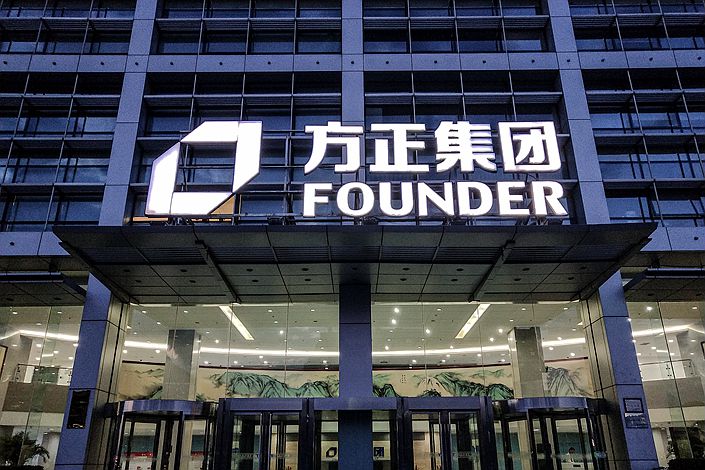 One of the creditors of Peking University Founder Group Corp. has asked a court to restructure the indebted state-owned conglomerate, which is set to pay up on 2 billion yuan ($285.4 million) of onshore bonds this Friday.

Bank of Beijing Co. Ltd. filed the application to a court in the Chinese capital, according to a statement (link in Chinese) issued Wednesday by Founder Group’s Shanghai-listed arm.

The court will decide whether or not a restructuring should go ahead. If it approves the application, a central-bank led team will devise a plan and supervise its implementation, people with knowledge of the matter told Caixin.

Bank of Beijing’s application comes shortly before Founder Group’s planned payment on 2 billion yuan of domestic bonds on Friday. Payment was originally due on Dec. 1, but Founder Group’s creditors agreed to extend the deadline after the company failed to make interest and principal payments, saying it was facing “extremely tight” liquidity.

Founder Group’s debt problems have come as a surprise to investors, who previously had no concerns about the state-owned enterprise (SOE), a brokerage’s bond investment manager told Caixin previously. As China’s economic growth slows, local governments no longer have as much ability to bail out struggling SOEs as they once did. Earlier this month, an SOE owned by the Qinghai provincial government tried to persuade investors in another of its SOEs to sell back defaulted bonds at sharp discounts.

Founder Group, which is 70% owned by the state-owned Peking University, is engaged in information technology services, real estate, health care and financial and commodities trading. Besides the 2 billion yuan in bonds due this month, the conglomerate has 34.5 billion yuan in outstanding onshore bonds and $3.2 billion of offshore dollar bonds.

Several bond managers told Caixin that it is unlikely Founder Group will be able to make the Friday payment on time. This could trigger cross-defaults on the company’s offshore bonds, according to the terms of the bond agreements.