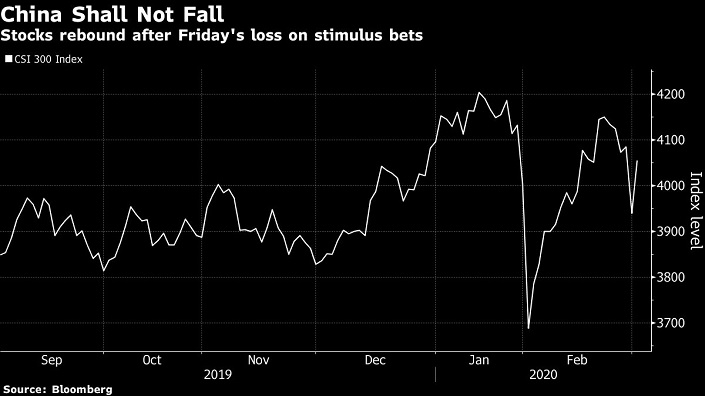 (Bloomberg) — China’s biggest stock rally in months signals investors are counting on Beijing to loosen the purse strings after data showed a collapse in economic activity.

Old-economy stocks led the charge on Monday, helping the CSI 300 Index close 3.3% higher for its biggest gain since May last year. A gauge of industrial shares rose 5.5%, the best day since September 2015. In a rare development, the Shanghai Composite Index outperformed the leverage-loving ChiNext index of smaller stocks.

The stock moves mark a shift in investors’ policy expectations after data for February showed manufacturing activity tumbling to the lowest levels on record. The economic fallout from the coronavirus outbreak — coupled with China’s cautious stance on monetary stimulus — is now spurring bets of more fiscal spending by the government. The central bank on Monday refrained from adding cash to the financial system for a tenth straight day.

“There’s no question about the essential role of more fiscal spending through infrastructure in order to shore up economic growth,” said Li Changmin, managing director at Snowball Wealth. “Fiscal spending is something that the government has control over and its effects in stimulating growth are straight and simple.”

Last month, China pledged to roll out more effective stimulus despite a widening fiscal gap as the virus hits an already slowing economy. Authorities at the time stressed the need to step up spending and ensure funds to contain the disease.

Turnover in stocks climbed above 1 trillion yuan ($143 billion) for a ninth day on Monday, the longest such streak since July 2015. More than 200 stocks in Shenzhen and Shanghai climbed by the 10% daily limit.

Liquidity, leverage and looser policy had helped the ChiNext Index rally more than any other major benchmark in China this year. It has been the most robust part of China’s stock rebound since a record rout in early February, fueled by excess capital as the government acted to lessen the impact of the virus on financial markets.

The rally gave cheer to the region’s investors, who sent MSCI’s Asia Pacific index up 0.8%, its first gain in eight days.