How a Coronavirus Outbreak Could Ravage North Korea 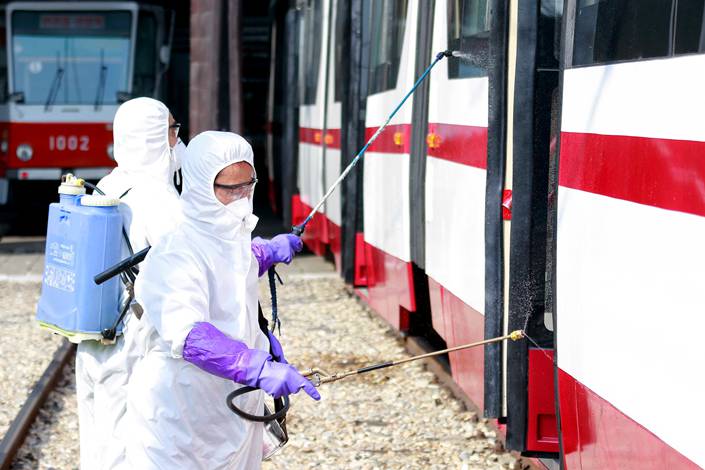 A tramcar is disinfected in Pyongyang, North Korea, on Feb. 26.

As governments in East Asia report tens of thousands of infections from the deadly new coronavirus, one country in the region has remained staunchly tight-lipped about the outbreak: North Korea.

The secretive nuclear state has yet to announce a single case of the virus, which causes a pneumonia-like disease known as Covid-19. In contrast, its two main neighbors — China and South Korea — are the two countries worst hit by the epidemic, having logged 80,000 and 6,000 cases respectively as of Friday.

And as the reclusive state hunkers down deeper to prevent a major outbreak, disruptions to cross-border trade with China threaten to snarl the regime’s economic lifeline and push it back into a game of nuclear provocation.

As with previous epidemics, Kim Jong Un’s government is unlikely to share much information about a prospective Covid-19 outbreak within its borders. North Korea’s international isolation means it “doesn’t owe it to anyone to publicly disclose case numbers,” Soo Kim, a North Korea expert at the RAND Corp. and former CIA analyst, told Caixin Global in an email.

Additionally, announcing a domestic public health crisis — even in response to a pathogen that has bamboozled leaders of far more developed nations — could undermine the Supreme Leader’s legitimacy, Soo Kim added.

“From a governance aspect, Kim Jong Un might view his inability to handle the outbreak as reflective of his failed leadership,” she said. “This could erode the North Korean population’s trust in — or rather, their fear of — their leader.”

Both the North Korean government and the few international health organizations that operate in the country remain taciturn about the possible presence of the virus there. Caixin Global was unable to contact the North Korean health ministry, while the World Health Organization’s Pyongyang office, which keeps a tally of cases in the region for international observers, did not respond to a request for comment by the time of publication.

However, South Korea-based media outlets, citing anonymous sources, have been reporting Covid-19 cases in the north for several weeks, some of which have apparently been fatal. North Korean defectors in the south have also passed on unconfirmed information from contacts back home about a disease that resembles Covid-19.

Experts told Caixin Global the virus has likely already reached North Korea. “I imagine there are several cases of Covid-19 there,” said Myungken Lee, a professor in the Graduate School of Public Health at Yonsei University in Seoul who served as the UN Development Program’s North Korea project director from 1998 to 2015. “I don’t know why (the defector community) would try to spread specific rumors (about Covid-19) in South Korea.”

While North Korea’s hard border with its capitalist neighbor effectively insulates it against the unfurling outbreak there, its northern border with China poses a far more serious problem. Under normal circumstances, the 1,420-kilometer (822 miles) boundary is relatively porous, with both Chinese and North Korean traders crossing back and forth with comparative ease.

But the spread of the disease in China has strained that relationship. Liaoning and Jilin, the two northeastern Chinese provinces that border North Korea, had respectively recorded 125 and 93 Covid-19 cases as of Friday, according to their provincial health commissions. Authorities have logged cases in places like Shenyang, Dandong, and the Yanbian Korean autonomous prefecture, where much of the two countries’ cross-border interaction takes place.

Despite those low case counts, the threat of the virus jumping the border from China has elicited a surprisingly swift and comprehensive response from North Korea, according to an analysis by 38 North, a website that provides information on the country. North Korea closed its borders to foreign tourists Jan. 21, has suspended cross-border road and rail services, and rolled out monthlong quarantines for foreigners entering the country from its massive Asian neighbor.

As of Sunday, the government was also “medically monitoring” nearly 7,000 people in at least three provinces for apparent symptoms of Covid-19, South Korea’s Yonhap News agency reported, citing North Korean state media. Few details about the monitoring procedures were given, but state media did say the government had given “life supplies” to those affected, indicating that they might be self-quarantining at home.

Additionally, North Korea also rolled out a weeklong quarantine of foreign residents and plans to evacuate around 60 foreign nationals to the nearby Russian city of Vladivostok on Friday, according to NK News, a website that publishes news and analysis on North Korea.

Two Chinese traders who conduct business with North Korea told Caixin Global that the country has remained off-limits since the border closure. But the seriousness with which Kim’s government seems to be taking the threat raises questions about how the country would cope with a major outbreak.

If a significant Covid-19 outbreak does erupt in North Korea, it’s unlikely the country’s creaking health system will be able to deal with it.

“An epidemic of a deadly viral disease inside the DPRK could lead to a disproportionate number of deaths,” said Kee Park, director of the Korea Health Policy Project at Harvard Medical School. “Most fatalities from epidemics occur in countries with weak health systems. The DPRK’s strategy is to do everything they can to prevent the virus from entering its borders and, at the same time, prepare for … an ensuing surge in patient volume.”

While the regime claims to provide universal medical care for its 25 million citizens, in reality the public health system has been declining since the 1990s. Severe underfunding means that many hospitals occupy derelict buildings, rely on decades-old facilities, and lack steady access to basic supplies like medicines, disinfectants, syringes, and intravenous drips.

Public health crises can exacerbate those shortages. A spokesperson for the International Federation of Red Cross and Red Crescent Societies (IFRC), which coordinates with the North Korea branch of the Red Cross, said there is an “urgent need for personal protective gear and test kits,” adding that the IFRC is “working hard” to deliver supplies requested by the North Korean Red Cross including face masks and goggles.

According to Lee, the former UNDP project director, many frontline North Korean doctors, while knowledgeable, probably lack the equipment and diagnostic tools to confirm cases of Covid-19, which can be difficult to distinguish from flu or other forms of pneumonia. That may dilute the quality of information about the disease reported by local authorities back up the chain of command to Pyongyang.

On Feb. 26, Russia announced it had donated 1,500 coronavirus diagnostic kits to Pyongyang “to help North Korea prevent the infection from penetrating the country.” The week before, John Linton, a Seoul-based doctor who has undertaken medical work in the North, told the U.S.’s National Public Radio that North Koreans had contacted him via backchannels to ask for supplies.

Outside Pyongyang — where hospitals are better-equipped to serve the country’s elite — and a couple of other major cities, North Korean hospitals likely also lack the equipment to diagnose and treat patients who have pneumonia, the condition that advanced Covid-19 causes.

The likes of X-ray film, oxygenation machines, ventilators, and so-called ECMO machines — a last-resort treatment that effectively pumps the patient’s blood through an external artificial lung — are all in short supply, Lee said. Chronic fuel shortages mean that the few regional hospitals and health centers that do have such equipment may experience frequent power cuts.

Despite the grim prognosis, North Korea does have some advantages when it comes to fighting an epidemic. Its doctors may lack the facilities of their international peers, but they are at least plentiful — around 37 per 1,000 people in 2017, according to the WHO. That’s a higher proportion than many developed countries, including the United States and South Korea.

Additionally, the regime’s long, enforced quarantine periods and existing techniques for controlling the movement of people — North Koreans usually need official permission to travel across city and provincial boundaries — may make infection prevention and control work easier, Lee said, adding that the threat of harsh punishments from the government make it likely that most people will comply with the rules.

Nonetheless, observers are in little doubt that a widespread outbreak could do extensive harm to North Korean society. More than 43% of North Koreans are undernourished, according to a 2019 UNDP report, making them more susceptible to disease. And around 9 million people don’t have good access to quality healthcare, the report estimated. In 2018, North Korea produced its lowest amount of food in at least decade, further imperiling public health and wellbeing, the report said.

“The potential for an outbreak of Covid-19 in the Democratic People’s Republic of Korea poses a deadly threat to millions of people who are already in need of humanitarian assistance,” the IFRC said. “Many people are already at risk of dying from curable diseases.”

“An outbreak in North Korea could spread quickly and create great hardship for the country's healthcare system,” said Jenny Town, a fellow at the Stimson Center and deputy director of 38 North. “Covid-19 could be more dangerous in a country where medical treatment is severely limited and weaker immune systems are common.”

Covid-19 may or may not already be putting pressure on North Korea’s health care system. But it’s certainly straining its economy — with potential international ramifications.

North Korean trade is deeply dependent on China, which accounts for more than 90% of North Korean imports and exports, according to a 2019 analysis by 38 North.

The sudden shutdown of their border hobbles that trade. “So much of the economy is based on cross border trade and tourism, especially from China, so this quarantine will have a huge economic toll in the near term,” Town said.

Park, the Harvard-based director, agrees. “The closing of the border has major implications for those who depend on trade with China, its main trading partner. The loss of revenue and the shortage of goods could be devastating to those who are already vulnerable.”

That’s not good news for a regime already wrangling with a set of Washington-backed UN sanctions designed to restrict funding for Pyongyang’s nuclear and weapons programs by squeezing its fuel imports, banning its food, machinery, and electrics exports, and sending home its overseas workers, who represent crucial sources of foreign currency.

As overseas trade slows to a trickle and some diplomats hightail it out of Pyongyang, Kim Jong Un’s regime is becoming less able to extract much-needed resources from foreign states by conventional means. That prospective instability may force it back to its tried-and-tested game of nuclear provocation, Soo Kim says.

On Monday, North Korea seemingly fired two missiles from a base on its eastern coast into the waters between South Korea and Japan. The launch can be considered in the context of the regional Covid-19 outbreak, according to Soo Kim.

“We will have to wait and see what other follow-up measures and statements North Korea will make, but the recent missile launches could be seen as Kim Jong Un’s gambit to avoid being completely isolated from the outside world,” she said.

The WHO and other humanitarian organizations will “probably” end up dispatching medicine, equipment, and possibly personnel to North Korea if the situation deteriorates, Soo Kim added. But for others with experience in North Korea, the risk of a public health disaster there seeds doubt about international efforts to further isolate the hermitlike, impoverished nation.

The international community should consider helping North Korea strengthen its systems for detecting, preventing, and controlling disease not only on humanitarian grounds, but also for the sake of regional security, said Lee.

“We need to support North Korea in some way, because it’s one of the least developed countries in Asia. If they have a problem, it usually goes on to affect China, South Korea, or Japan,” Lee said. “That’s another angle from which we need to think about this in future.”