Opinion: Thank the Government for Controlling the Virus? No, They Should Be Thanking Us 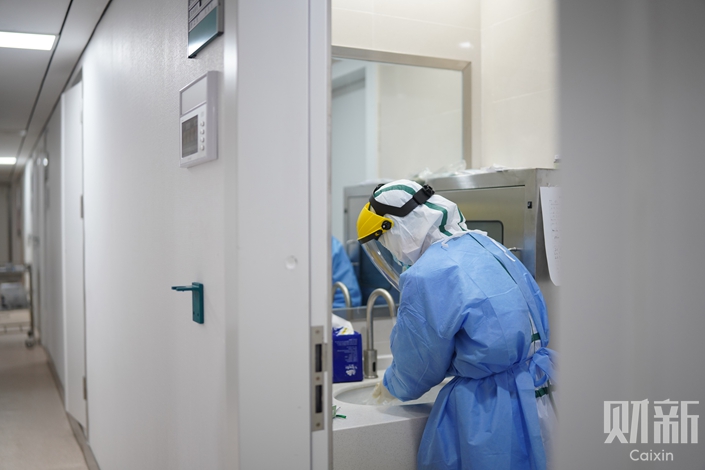 A medical worker washes his or her hands at a hospital in Wuhan, Central China’s Hubei province, on Feb. 5.

On Sunday, well-known author Fang Fang posted a blog on Caixin’s Chinese-language website lambasting the “arrogance” of top government officials in the central city of Wuhan, after they announced plans to roll out so-called “gratitude education” to make sure local residents properly thank the Communist Party for controlling the coronavirus epidemic that has so far killed nearly 2,500 people in the city, according to official figures.

Fang’s article argues that rather than soliciting praise from their citizens, Chinese officials should thank the country’s medical workers, sickened patients, and bereaved families for their self-sacrifice, restraint, and cooperation amid a grave human tragedy.

Below is a partial translation of Fang’s article, edited for length.

What a bright, clear day. The epidemic is taking a turn for the better, and everyone’s contribution deserves praise. On the internet, a growing number of people are calling for citywide lockdowns to be gradually lifted.

Many hospitals in Wuhan have already started resuming normal inpatient services. Quite a few people with other ailments died during the outbreak, unable to receive the care they needed. The epidemic has brought about those kinds of collateral disasters. In our compound alone, two elderly people passed away like that. If they’d had access to normal medical care, perhaps they wouldn’t be dead now. Another huge problem is the number of people pushed into dire financial straits, with no livelihood or means of looking after their families.

While chatting with a former classmate, the conversation turned to how people will arrange funerals and cremations for the dead. Afterward, I reached out to a psychologist to ask how the people of Wuhan should manage its next challenge, namely the thousands of families who will try to arrange burials at the same time. How should the city get through those few days, and handle yet more collective trauma?

The psychologist said that because the disease is contagious, the city’s undertakers have been postponing cremation ceremonies and storing the ashes of the dead until the epidemic is over. Only then will they call up relatives, allow them to come collect the remains of the deceased, and organize funeral ceremonies. I suppose the government will have to help organize the collection of the remains of so many thousands of people.

Because this calamity is manmade, people need to be able to express their grief before they can get through it. Without that means of expression, it’ll be hard to move on. When so many families have lost loved ones, each must look to their own support networks. Vulnerable families need substantive help from the government and society; psychologists alone can’t manage all of that.

Another friend of mine who somewhat understands the nature of psychological trauma said that the really serious issues will only emerge once the public moves on from “emergency response” mode. After the epidemic is over, many people will experience periods of post-traumatic stress disorder (PTSD).

Many bereaved families not only lost their loved ones in sudden and unexpected circumstances, but were also unable to stay at their bedside or say a proper goodbye during their final days. No matter how you treat those wounds, they’re going to leave scars, and so I predict that many of those people will suffer PTSD. A few doubly traumatized people will also contract the virus, condemning them to repeat the same negative experiences like a recurring nightmare. Some will numb themselves in a bid to avoid feeling pain; others will become hypersensitive to it.

I hope the epidemic ends soon, but fear the day when thousands of families in Wuhan try to bury their dead. I don’t know if other psychologists can suggest valuable and feasible ways to help the families of the bereaved, and all people in Wuhan, to overcome this hurdle more easily.

A word that crops up frequently in conversation these days is “gratitude.” High-level officials in Wuhan demand that the people show they’re grateful to the Communist Party and the country. I find this way of thinking very strange. Our government is supposed to be a people’s government; it exists solely to serve the people. Government officials work for us, not the other way around. I don’t understand why our leaders seem to draw exactly the opposite conclusion.

As Wuhan University professor Feng Tianyu said: “When it comes to expressing thanks, never invert the relationship of the people to their rulers.” Feng goes on to say we need look no further than Marx for a criticism of how viewing rulers as benefactors demands that the people prostrate themselves in homage. In 1875, Marx wrote in his “Critique of the Gotha Program” that he detested Ferdinand Lassalle’s national-style social democracy, and that people needed to seriously educate themselves on the idea of the nation.

Given the respect that Feng commands in Wuhan and the surrounding province of Hubei, can we safely assume that the incoming group of leaders there will heed his words?

Yes, we need to feel genuinely thankful that the epidemic is now basically under control. But the ones who should be standing up and showing their gratitude are those in government.

The government must express its gratitude to the thousands of families who have watched their loved ones die in the outbreak. Amid this unexpected disaster, which has left them without so much as a chance to give their deceased relatives a proper sendoff, they have endured great sorrow and exercised admirable restraint. Hardly anyone has made a fuss.

The government must thank the more than 5,000 severely ill people still lying in hospitals, locked in a bitter fight with death. Their tenacity and persistence have stopped the list of the dead from lengthening more quickly.

The government must thank all of the 40,000 medical personnel, both locals and those brought in from other parts of China, for snatching life after life from the clutches of death at great personal risk.

The government must thank the organizers, laborers, and volunteers who rushed down every street and alley during the lockdown. Without them, this city wouldn’t have been able to function.

And the government must be most thankful for the 9 million citizens in Wuhan, who stayed indoors and never ventured outside. Without their willingness to overcome serious difficulties and cooperate with the authorities, we’d never have been able to control the epidemic.

Now that we’ve reached this stage, no words can adequately describe the sacrifices of the people of Wuhan. I say to the government: You need to rein in your arrogance and humbly offer thanks to your masters — in this case, the millions of people in Wuhan.

Now is the best time for reflecting on what happened and investigating who is responsible.

A sensible, conscientious government that understands its people’s desire for solace would quickly form an investigatory group and immediately commence a detailed reconstruction of the outbreak from start to finish, in order to find out who missed chances to stop it sooner, who decided to conceal the truth from the public, who covered it up to save face, and who decided that people’s lives were secondary to political correctness. How many people helped create this disaster? The people need to know, as soon as possible, who will bear responsibility.

At the same time, the government should also urge key executive, propaganda and health officials, as well as media workers and officials at hospitals with large numbers of deaths, to immediately conduct self-examinations and voluntarily resign from their posts if they have misled the public or caused unnecessary casualties. The law will decide if their actions constitute a criminal offense.

Yet my impression is that few of China’s government officials reflect on their misdeeds, let alone voluntarily resign because of them. If that happens, perhaps the least the public could do would be to write a petition urging the resignation of officials who view politics as their lifeblood but treat people’s lives like dirt. How can those with blood on their hands continue to point the finger at the people of Wuhan and Hubei? Suppose 10 or 20 officials willingly handed in their notices instead; wouldn’t that prove that our current crop of officials still have some kind of conscience?

This evening, I received a text message from a well-known author. He said something deeply profound: “Who could have expected another catastrophe would befall Wuhan?” In the future, will that wonderful word, “gratitude,” become sullied and filthy? And in the present, will it become too sensitive for public discussion?