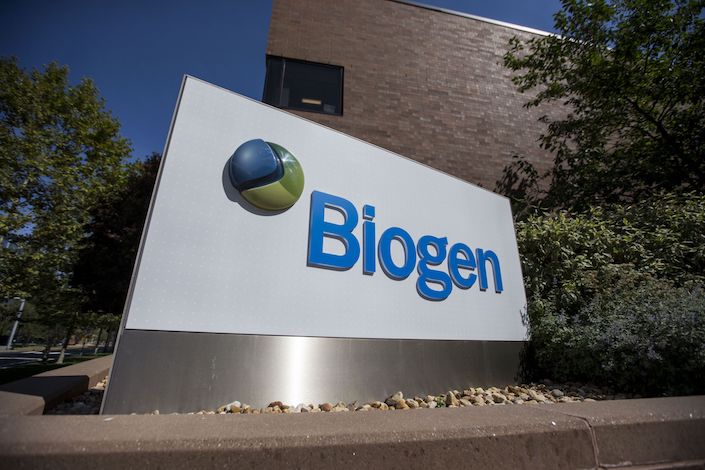 Signage is displayed in front of Biogen Inc. headquarters in Cambridge. Photo: Bloomberg

(Bloomberg) — At the Northeastern University Emergent Epidemics Lab, researchers have a convenient petri dish for studying the spread of pandemics: their hometown of Boston.

The city is one of the major coronavirus clusters in the U.S., along with Westchester County, New York, and Seattle. In Boston, it all began with a Feb. 26 meeting at the Boston Marriott Long Wharf hotel, near the tourist mecca of Faneuil Hall and overlooking Boston Harbor.

There, about 175 executives met from around the country, then unwittingly spread contamination across the city and, likely, around the world. Ironically, they were from Cambridge, Massachusetts-based Biogen Inc., whose very mission is to develop drugs, rather than spread disease.

The region is known for its top-flight universities and hospitals. Now, those institutions’ very experts, along with its public officials, are well-positioned to figure out how the disease is spreading from that conference through the Boston metropolitan area of 4.9 million people — and beyond. The city now reminds modelers of how matters unfolded in hard-hit Italy, whose hospitals have been overwhelmed.

“Massachusetts is smaller than Italy,” said Sam Scarpino, an assistant professor of network science who heads the epidemics lab at Northeastern. “It has about 100 cases. There were 159 cases in Italy two weeks ago. That’s where we’re headed. We’ve got to move now and decisively prepare hospitals, work remotely and ramp up testing.”

Scarpino works in a small office on the second floor of a concrete off-campus building. A map of the 19th century whooping cough outbreak hangs on his wall. His six-person team focuses on New England, New York and New Jersey. He keeps in frequent communication with another Northeastern lab on the 10th floor of the building that’s modeling the virus across the country.

Whether the situation here becomes as dire as Italy — or infections remain more restrained— will depend on research efforts such as these and Boston’s public-health initiatives to slow down the spread of the virus. Italy reported 12,462 cases on Tuesday and 827 deaths from Covid-19, as the disease caused by the virus is known. The virus has led to fatalities primarily of older people or those with other health problems.

As in the rest of the country, researchers in Boston are hamstrung by the government’s slow roll-out of testing. The Biogen meeting, in particular, is a puzzling case because it resulted in so many infections. The lab is focusing on a number of hypotheses. Could it be something about the ventilation system that promoted the spread? What if several people arrived at the meeting already infected? Why this meeting, when so many others of the same size were happening across the U.S?

It may take another week before Scarpino has enough testing data to make any public predictions about the scope of community spread in Massachusetts. But he’s leaning toward the idea that the actual number of infected state residents is likely many multiples of the 95 positive tests announced as of Wednesday. Based on the experience in Italy, China and South Korea, he said, the number of new cases is doubling every four to seven days.

In the U.S., the five cases and one death reported Tuesday in South Dakota is a warning flag that community spread is wider than what authorities can capture.

“A cluster of cases in small states that are much more isolated like South Dakota is compatible with a much higher case count that we’re not seeing because we’re not testing,” Scarpino said.

The detective work starts with a fuller picture emerging about what happened at the Biogen conference. There, colleagues from around the world greeted each other with handshakes and hugs and picked from plates of pastries and a self-serve hot-food bar, according to a detailed reconstruction by the Boston Globe.

Those in attendance “included one or more individuals from Italy,” a Biogen spokesman said. All those at the conference were invited to dinner near Faneuil Hall.

On March 5, more than a week after the event, the company said a number of attendees reported different degrees of flu-like symptoms. At least three tested positive for the virus. Of those initial cases, two employees were based in Europe, a company spokesman confirmed. Biogen required those who attended to work from home for two weeks. The firm advised employees who did not feel well to stay home and contact their doctors.

But it was too late. Some Biogen employees with the virus had already attended an investment conference hosted by New York-based investment firm Cowen & Co. on March 2 at the Boston Marriott Copley Place. The conference, which hosted more than 325 public and private companies, did not alert attendees until Sunday that at least one Biogen employee who attended had tested positive for the virus. They had continued to meet and go about daily life for almost a week after potentially coming in contact with it.

So far, 77 cases have been linked to the Biogen conference. It wasn’t long before its contagion left the city.

Two attendees of the Biogen conference in Boston who have tested positive for coronavirus later attended a private party of about 47 people in Princeton, New Jersey, according to local officials. At least two people who attended the party are residents of a nearby town, South Brunswick, which closed schools on Wednesday, even though no South Brunswick residents have tested positive for the illness. Those who went to the party were asked to self-quarantine until assessments and any testing is complete.

But the shock waves are felt most powerfully in Boston. Other biotech companies, including Boston-based Vertex Pharmaceuticals Inc., have told employees to work from home. Boston Mayor Marty Walsh canceled the city’s St. Patrick’s Day parade. Conventions are being postponed or canceled. And on Thursday, Marriott said it would close the hotel that hosted the Biogen conference.

Massachusetts Governor Charlie Baker on Tuesday declared an indefinite state-wide emergency, which gives him the authority to cancel large events. Baker, a former chief executive officer of Harvard Pilgrim Health Care, which has more than 1.1 million members statewide, banned travel by many state employees and waived attendance requirements for schools.

Boston’s Brigham and Women’s Hospital activated a drive-up virus testing facility in its ambulance bay. Patients remain in their vehicles, rolling down their window for staff to collect a sample to be sent to the state’s lab for testing.

Harvard University, the University of Massachusetts system, Boston University, Northeastern and the Massachusetts Institute of Technology have canceled in-person classes and moved to online instruction. Many students are away on spring break and have been told not to return to the campuses.

At Harvard’s Cambridge. Massachusetts campus, empty moving trucks were parked on the lawn outside a residence hall and stacks of flattened boxes piled up near an entryway. Ethan Kipke, a senior computer science major, was headed home to the Philadelphia area for spring break and wondered what the cancellation of in-person classes will mean for his graduation.

“This is more abrupt than expected,” he said. “We’re trying to figure out what’s going to happen.”

Coronavirus is spreading into Boston’s suburbs, such as Wellesley, which sent students home from two schools last week. Eleven town officials in nearby Norwood have been self-quarantined after coming into contact with a Covid-19 sufferer at a private event. The Norwood officials include the town’s schools superintendent and its general manager, who has since tested positive for the disease.

The outbreak’s impact has, of course, reached the academic researchers at Northeastern. Members of both labs have been working from home. Scarpino, the lab chief, has been counseling hospitals that are in the dark about how many negative-pressure isolating tents they’ll need for the coming onrush of patients.