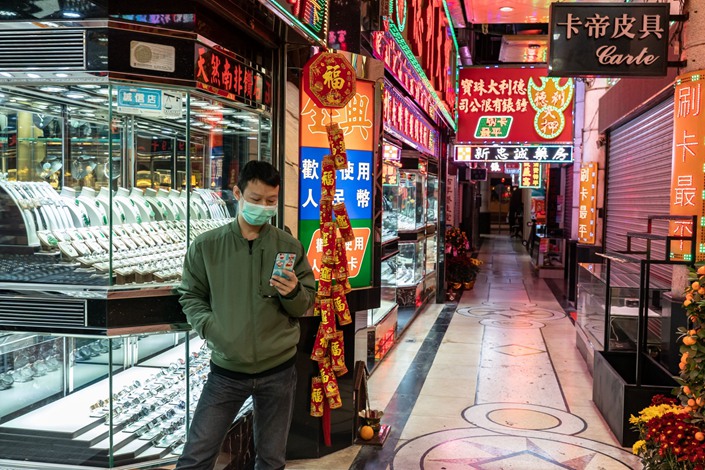 A man stands outside of a jewelry store in a shopping district in Macau on Feb. 4. Photo: Bloomberg

(Bloomberg) —The coronavirus pandemic has frozen the Chinese gold market, torpedoing demand at a time when investors elsewhere in the world are clamoring for the safety of bullion.

China is the biggest buyer of gold bars, coins and jewelry, but the national shutdown to contain the virus has emptied malls, while the premium charged to buy the metal in China has evaporated. It leaves the industry staring down a long road to recovery, even as Beijing tries to jump-start broader consumption with a campaign to get shoppers out and about.

The market’s struggles in China may present a headwind for prices, which last month topped $1,700 an ounce for the first time in seven years. The traditional haven also faces a drag from slower retail consumption in India, Europe and the U.S., as well as Russia’s surprise decision to halt purchases by its central bank. Last year, Chinese consumers accounted for about a fifth of total gold demand of 4,356 tons, according to the World Gold Council.

“Domestic demand for gold will recover very slowly,” said Zhang Yongtao, chief executive officer of the China Gold Association. “Even after processors resume production, one major issue is that there are no orders,” he said.

China’s retail sales of gold, silver and jewelry plunged 41% in the first two months of the year. Zhang estimated that the amount of gold jewelry sold in the first quarter will have fallen by at least half, setting up a significant decline for the whole year. “Consumers won’t return to buy gold jewelry until the pandemic ends, and Chinese investors are also unwilling to purchase gold with their deposits at the moment,” he said.

The trepidation contrasts with a flurry of activity on the global market last week, which saw gold refineries shut and aircraft grounded, creating a massive squeeze on gold futures in New York as traders scrambled to get enough physical metal to meet their commitments.

It also comes as the Chinese economy inches back to normality and new infections slow to a trickle. The nation was about 90% back to work at the end of last week, according to Bloomberg Economics. Still, consumers remain hesitant after weeks of government warnings about the dangers of mingling with others, and as financial pressures mount amid rising unemployment.

Jewelry retailers have felt the heat in particular. Luk Fook Holdings International Ltd. issued a profit warning in March after sales on the mainland tumbled 37% in the first two months.

“Most of the group’s shops in mainland China reopened in March with improved store traffic, while customer visits to shops in Hong Kong and Macau were still sparse,” said Deputy Chief Executive Officer Nancy Wong. “It’s expected that it’ll take some time for the business to return to normal.”

Gold price premiums in China “have collapsed to negative levels not observed since the Great Financial Crisis,” Citigroup Inc. said in a note this week. The bank said that suggests jewelry consumption could hit lows not seen in a decade or more.

The market remains concerned over the constraints around delivering bullion, which is contributing to price volatility, said Haywood Cheung, president of the Chinese Gold & Silver Exchange Society, which trades physical gold and silver in Hong Kong.

Production cuts at gold refiners will help boost prices, he said, while broader conditions remain supportive to bullion. “Even if the virus situation improves, we will continue to see lower interest rates, weaker capital markets and global monetary easing, which will support gold prices,” he said.