By He Shujing and Lu Yutong 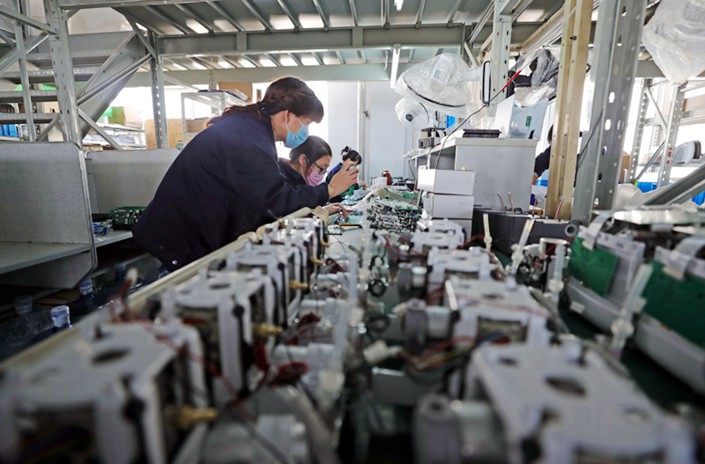 A woman produces ventilators on a production line in Shenyang, capital of Northeast China’s Liaoning province on Feb. 5. Photo: Xinhua

The official’s answer underscores both the limits of China’s industrial capacity and the current deficiencies in global supply chains that manufacturers rely on to produce equipment like the machines that help the sickest Covid-19 patients keep breathing.

Invasive ventilators made in China account for less than one-fifth of the world’s total output due to a shortage of core components that have not been shipped to China due to disruption of the supply chain, said Huang Libin, an official at the Ministry of Industry and Information Technology.

“Chinese factories are working around the clock, but our ability is limited in the face of enormous global demand,” he said in response to a question about whether China’s ventilator output could keep up with rising orders from overseas.

As of April 8, major manufacturers in China had produced about 29,000 ventilators this year for the domestic market, and exported nearly 18,000, according to ministry data. China is capable of producing 2,200 invasive ventilators a week, less than one-fifth of global demand, according to the conference transcript.

Huang noted that it is unrealistic to expect the country to meet global demand for the machines even if producers had sufficient supplies of necessary components.

Manufacturers in China have borne the brunt of the collapse in global supply chains as numerous commercial flights were grounded and ports were shut, resulting in a lack of raw materials and components sourced from overseas.

The country has also tightened export standards for some medical supplies including test kits, masks and ventilators, after accusations surfaced abroad that some manufacturers were shipping substandard products overseas.

“It’s impossible to realize a massive expansion of capacity in the short-term by converting eligible plants into ventilator producers and ramping up output,” Chen said. “And it’s difficult (to realize that) in the longer term,” he added.