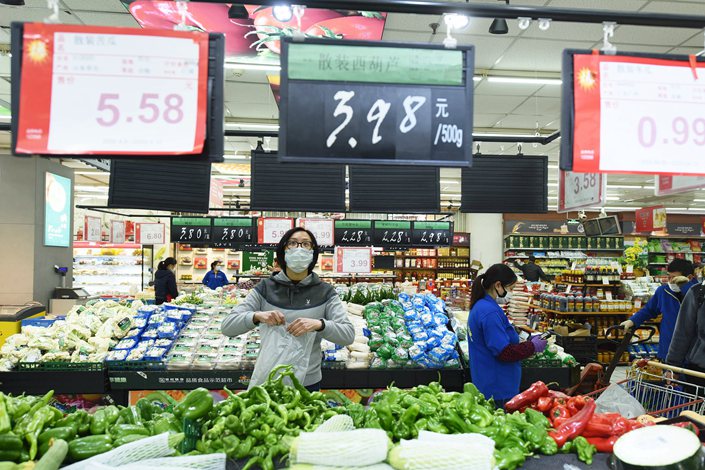 The consumer price index (CPI), which measures the prices of a select basket of consumer goods and services, rose 4.3% year-on-year last month, down from 5.2% growth in February and marking the second consecutive monthly deceleration, according to data from the National Bureau of Statistics (NBS). The March reading was lower than the median estimate of 4.8% growth from a Caixin survey of economists (link in Chinese).

Pork remained the major driver of CPI growth, with prices surging by 116.4%. However, the reading was down from 135.2% growth in February. China’s stock of breeding sows has recovered in recent months after the outbreak of African swine fever. Since August 2018, the outbreak has wiped out a huge portion of the country’s hog population and triggered an extended surge in pork prices.

Li Chao, an analyst with Zheshang Securities Co. Ltd., wrote in a Friday note (link in Chinese) that both the supply and demand sides of pig industry chains have rebounded, and pork prices are likely reaching a cyclical peak, set to drop soon assuming swine fever does not break out again on a large scale.

Li also forecast that CPI growth will continue to slow this year, as consumption and logistics capacity rebound amid an abating domestic coronavirus epidemic. However, service providers like restaurant operators could moderately increase prices to offset their losses during the outbreak, Li noted.

Core CPI — which excludes more-volatile food and energy prices and may better reflect long-term inflation trends — rose 1.2% year-on-year in March, up slightly from 1% growth the month before, the NBS data showed.

The producer price index (PPI), which tracks changes in the prices of goods circulated among manufacturers and mining companies, fell 1.5% year-on-year in March, NBS data showed (link in Chinese). The reading dropped for the second month in a row. The decline was steeper than the median estimate of a 1.2% drop by economists surveyed by Caixin.

Falling global commodity prices were a major factor behind the PPI decline, according to (link in Chinese) Chen Li, an analyst with Chuancai Securities Co. Ltd. In the second and third quarters this year, foreign demand will likely fail to underpin the PPI, as the ongoing pandemic has severely hurt China’s major trading partners including the EU, the U.S., Japan and South Korea, Chen said.

The PPI dropped 1% month-on-month in March. Li projected that the decline will probably continue into the coming quarter given weakening global demand and uncertainty of global oil prices.