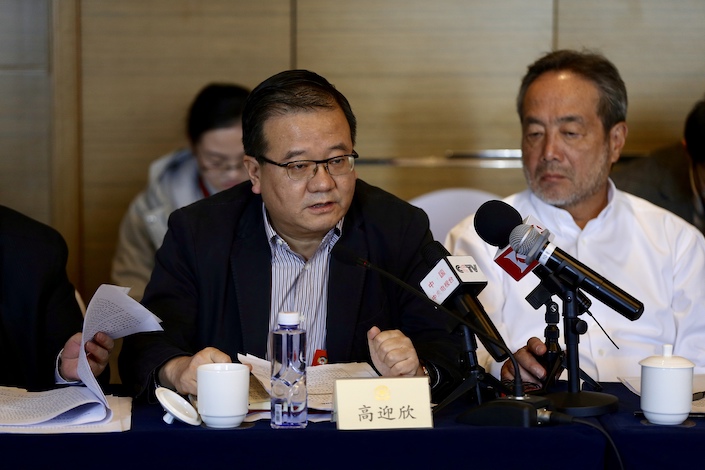 Gao Yingxin, the head of Chinese state-owned Bank of China’s Hong Kong subsidiary, may become chairman of China Minsheng Banking Corp. Ltd., the nation’s largest privately owned bank, according to several industry insiders. Such a move may ease long-running tensions between the bank’s top management and its biggest shareholders.

As a member of the Chinese People’s Political Consultative Conference (CPPCC) political advisory body, Gao is in Beijing attending the annual “Two Sessions” of the National People’s Congress (NPC), the country’s top legislature, and the CPPCC. Afterward, Gao, 57, may remain in Beijing and join Minsheng amid a looming overhaul of the lender’s board, the industry insiders said.

The timing could be a challenge as the board faces an election of directors that was delayed from February because of the Covid-19 pandemic. The bank’s stock has been underperforming its peers, drawing criticism from shareholders. Management, stockholders and China’s banking regulator have clashed over key candidates for the new board, Caixin learned.

As an early pioneer of China’s banking restructuring, Minsheng has had diverse ownership since its inception in 1996. Its 10 largest shareholders are all private enterprises. Conflicts between Minsheng shareholders and management are much fiercer than at many other Chinese banks, insiders say.

The candidates for the new board are mostly incumbents, but the current board has disagreed with the China Banking and Insurance Regulatory Commission (CBIRC) over the nominee to be the next chairman to succeed Hong Qi, several people close to Minsheng’s shareholders told Caixin. Hong, 62, has served as chairman since 2014. His second term will end this year.

In December, Chinese billionaire Shi Yuzhu, a long-time Minsheng shareholder, requested that the compensation of new board members be linked to the bank’s financial performance and market capitalization, sending a signal that shareholders were frustrated with the bank’s lackluster stock price.

Minsheng’s price-to-book ratio, which compares a company’s market value with its book value, has long been around 0.55, below the average ratio for A-share listed banks of 0.6–0.7, and way below its rival China Merchants Bank with a 1.5 ratio.

Before the Chinese New Year in late January, Minsheng’s board pledged that the chairman and senior management wouldn’t get bonuses if the stock’s market cap didn’t double during the term of the new board, people from the bank told Caixin.

In 2019, Minsheng submitted two candidates for president to the CBIRC, which rejected both, Caixin learned from exclusive sources. Instead, the CBIRC recommended Bank of China’s Gao.

Gao joined Bank of China in 1986 right after completing graduate school with an engineering degree. He held a number of positions in various domestic and overseas branches of the state-owned bank before he was appointed vice chairman and chief executive of the Hong Kong unit.

Several people at Bank of China said Gao was promoted quickly thanks to his overseas experience. Bringing in someone with a significant banking background and an international perspective as the chairman might be the regulator’s approach to reshaping Minsheng’s culture and reconciling the differences between the board and the management, the people said.

Minsheng’s current president, Zheng Wanchun, is also from a state-owned bank. Before joining Minsheng, Zheng was vice president of Industrial and Commercial Bank of China Ltd. He has had differences over the bank’s business philosophy and how to boost shareholder return with current chairman Hong, who was a branch head of state-owned Bank of Communications before joining Minsheng.

In January 2019, Minsheng set up an executive committee led by Hong. This move showed that the chairman had become more deeply involved in management, probably under pressure from shareholders to improve the bank’s stock performance, a mid-level executive at Minsheng told Caixin.

The bank’s depressed share price is also related to its former biggest shareholder Anbang Insurance Group, which held about a 17% stake. In 2018, Anbang’s founder and former Chairman Wu Xiaohui was jailed for fundraising fraud and embezzlement. The government took over Anbang that year and eventually restructured it into Dajia Insurance Group, which became Minsheng’s biggest shareholder.

Dajia sold off Anbang’s entire stake in China Merchants Bank and needs to dispose of at least 12% of Minsheng to meet regulatory requirements. But as Anbang bought the shares at much higher prices than the stock’s current value, selling them now would means a big loss for Dajia.

Dajia nominated two directors to Minsheng’s board, according to people familiar with the matter.

This story has been updated to correct the sequence of events surrounding the government’s takeover of Anbang. The takeover took place in February 2018, before Wu Xiaohui was sent to prison for fundraising fraud that May.