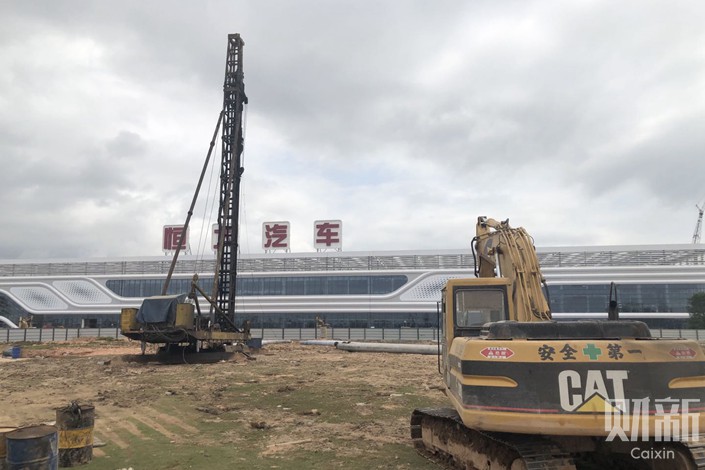 An Evergrande Health facility under construction in Guangzhou, Guangdong province. Photo: He Xin/Caixin

Real estate giant China Evergrande Group is purchasing the remaining 17.6% that it doesn’t already own of a Swedish new-energy car technology specialist for $380 million, as its drive to diversify beyond its core business accelerates.

The deal values National Electric Vehicle Sweden AB (NEVS) at nearly $2.2 billion, and was expected to close by Friday, according to a late Wednesday announcement to the Hong Kong Stock Exchange. After the closing, NEVS would become 100% owned by Evergrande Health Industry Group, the unit that has become Evergrande’s vehicle for its health and new energy vehicle businesses.

Evergrande first announced in January 2019 it would purchase 51% of NEVS for $930 million. Subsequently it boosted its ownership through several purchases to reach the 82.4% of the company it held before the latest announcement.

NEVS is engaged in intelligent electric vehicle manufacturing, motor electronic control, power battery, smart charging and travel-sharing technology, according to the announcement. It was founded by a Chinese businessman in 2012 through the acquisition of some assets of then-bankrupt Swedish automaker Saab. It posted the equivalent of about HK$88 million ($11.3 million) in revenue last year, with a net loss before tax of about HK$2.6 billion.

“The group believes that the acquisition will help consolidate the group’s market positioning within the new energy industry and enable the group to benefit from the enormous potential of the new energy vehicle market,” Evergrande said. It added that NEVS was helping to develop technology for the Hengchi brand of electric vehicles that Evergrande is developing.

Evergrande is one of China’s top real estate developers, but is trying to hedge its prospects by diversifying into other areas like new energy vehicles as the nation’s property market cools after years of breakneck growth. The company spent 14.1 billion yuan ($2 billion) on electric-vehicle projects in the first half of last year, and said it was planning to pump another 6 billion yuan into the area by year end.

In its latest annual report, Evergrande Health stated its ambition of becoming the world’s largest new-energy vehicle company in the next three to five years, even as the Chinese subsidies that played a huge role in creating the local market are getting phased out.

Observers have questioned the company’s acquisition-led approach to developing an EV business, noting that most of the companies Evergrande can buy are not industry leaders. Moreover it will be difficult to integrate them into a unified, effective business, they add.

In its latest annual report released in April, the company pointed out that China’s 2.2 million electric vehicles sold in 2019 accounted for more than half of the world’s total, and said its own business “was progressing steadily in line with our planned goals.” It said its first car under the Hengchi brand, dubbed the Hengchi 1, was expected to debut later this year, and that a full range of Hengchi products would gradually start mass production from next year.