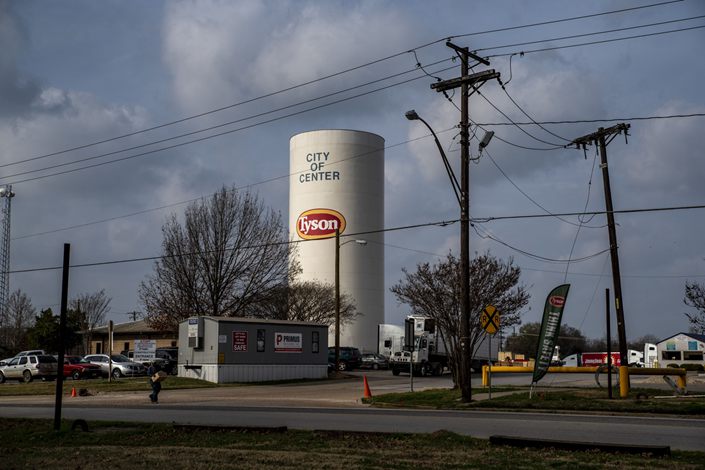 All products from the plant in Springdale, Arkansas, where Tyson is based, that are about to arrive in China or have arrived at the country’s ports will be seized by customs. The suspension announced Sunday is an about face from just a few days ago, when Chinese officials said food was unlikely to be responsible for a fresh virus outbreak in Beijing.

The move is a potential new threat to meat plants across the world that have seen slaughter disruptions because of the virus. In the U.S., hundreds of workers have become ill, and dozens have died. There’s also been a recent uptick in infections at facilities in Brazil and Germany.

“There are worries in China over serious coronavirus outbreaks in the U.S.,” said Lin Guofa, a senior analyst at Bric Agriculture Group, a Beijing-based consulting firm. The public is worried about imported frozen products as almost all cases in Beijing have been connected to a meat and frozen fish wholesale market, he said.

A new outbreak in China had been blamed on imported salmon after the head of a food market where clusters were detected said the virus had been traced to a chopping board used by a fish seller. Fears over whether food can transmit viruses had led salmon to be boycotted in the Asian country.

If China continues to suspend shipments based on coronavirus cases reported at processing plants, it could also threaten to undermine promised agricultural purchases as part of the Washington-Beijing trade deal.

Tyson in a statement Sunday said it was looking into the report and cited that the World Health Organization and the Centers for Disease Control and Prevention say there’s no evidence that virus transmission is associated with food. The company late Friday said 13% of its workers tested positive for the virus at plants in northwest Arkansas.

China has backed off from its previous stance linking food to virus cases. A customs official at a briefing on Friday said the country was taking the advice of international organizations that there’s a low risk of imported food transmitting the virus, and no food restrictions would be imposed.

But the move to block the Tyson shipments runs counter to that, and reverts the country back to increasing its scrutiny over imported food. Meanwhile, a German abattoir last week voluntarily halted pork exports to China after workers were found to be infected.

China’s customs department said over the weekend that one poultry company in Britain reported Covid-19 cases. While the U.K. isn’t allowed to export poultry to the Asian nation, its authorities have agreed to take measures to prevent the virus from contaminating pork and beef exports to China, and will inform the Asian nation whenever exporters have any outbreaks.

China’s customs authorities had started testing all shipments of imported meat for the virus, while officials in some major cities were also checking the products at domestic markets. In a statement last week, China Customs said all 32,174 samples of imported seafood, meat, vegetables, fruit and other related products had tested negative.

The country’s scrutiny may end up having a big impact on global food shipments. Its surging imports of meat had helped to buoy U.S. and Brazilian producers of poultry, pork and beef, both before the nation’s virus outbreak in January and as global trade has staged a nascent recovery in recent weeks with the country exiting lockdowns.

Through April, U.S. exports of poultry meat and products, excluding eggs, to China were valued at $152 million, up from only about $7 million in the comparable period in 2019, U.S. Department of Agriculture data showed.

Still, China’s market is facing a chicken surplus from its own production and stagnant demand, Bric Agriculture’s Lin said. China also imports most of its poultry from Brazil, while the U.S. makes up just a small percentage of imports, therefore the halt will have little impact on the domestic market, he said.

Beijing is the site of a recent jump in new cases in China after a two-month lull. Some residents are back under partial lockdown and transport links are disrupted, with more than 800 flights canceled on Friday.

On Sunday, PepsiCo China said it shut a food plant in the Chinese capital after a case of the virus was confirmed earlier in the week. The company conducted tests on all employees at the plant and quarantined 480 workers, even though they all tested negative, one of its officials, Fan Zhimin, said at a local government briefing. PepsiCo China later said in a WeChat post that none of its beverage plants in the country have reported any cases of the virus.

Meanwhile in the U.S., meat plants have almost returned to pre-virus production levels after outbreaks in April and May forced facilities to shutter.